Hot Tuesday Tips on Photographers Working in the South

In my part of Georgia school begins in early August, although it’s the hottest month of the year — we call it dog days — and many people head to the mountains and cooler weather, maybe to northwest Georgia for the weekend, where the beautiful home above is located.  In honor of Georgia’s heat and high humidity, below are some Hot Tips you can consider:

Updates on “Researching Photographers Working in the South”

And speaking of school, some items pertaining to Georgia…..

The Historic Schools Photograph Collection went online on the Georgia Archives Virtual Vault this spring. This collection of about 1,800 images of Georgia primary and secondary public schools, both white and African-American, then scheduled for demolition, were taken by the Georgia Department of Education in the 1950s.

LaGrange College, the oldest private college in Georgia, has their Bulletins called “Views In and About LaGrange College, LaGrange, Georgia,” online at archive.org. Take a look at  the issue dated June 1916.

Before you know it, it will be graduation time again. Another nice post on that topic from the Library of Congress Picture This blog was called A Look at Graduation Time. It includes graduation-related photographs from Alabama, Mississippi, Virginia, and Georgia (Greene County).

An interesting and influential American photographer born in Nashville, Tennessee, who worked in Tennessee, Illinois, Missouri, and Texas, is Felix Addison Raymer (1870 – 1924). He began his career in 1885, as photography assistant to his uncle J.S. Patterson in Patterson’s Pulaski, Tennessee, photo studio, eventually becaming Patterson’s partner. In 1893, Raymer began teaching at the Illinois College of Photography in Effingham, Illinois.  A pioneer in three-color photography using colored backdrops and assorted chemicals in photo development, Raymer also invented the “Jupiter Lamp,” to replace the skylight, and wrote a book called “Photo Lighting.” In 1900, he took a job teaching at Guerin College of Photography, in St. Louis, Missouri. He returned to Effingham and taught until 1913, when he moved his family to Dallas, Texas and took a job as an operator with the Studio de Luxe, Browne and Browne proprietors. Read more about him at the link above. 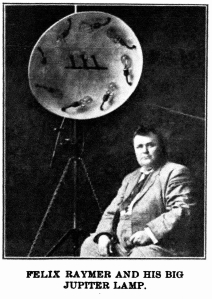 Felix Raymer as depicted on the first page of his article “The Jupiter Lamp,” in The Professional and Amateur Photographer vol. XIV #7 (July 1909).

I periodically do a search on the term “Georgia” in the Prints and Photographs online catalog, which is part of the Library of Congress website, but it had been over six months since I’d checked, and this time I saw some very familiar images. They have a series of salted paper prints taken by Georgia photographer, A. J. Riddle, within the Andersonville Prison stockade (known then as Camp Sumter), on August 17, 1864. Several other repositories and private collectors also have some of these photographs. Although his main studio was then in Macon, Georgia, only a few years later Riddle had a photo studio in nearby Americus, not far from the notorius prison.

The seven prints (he made a total of ten) at Library of Congress are part of the Liljenquist Family Collection of Civil War Photographs. One is an original with Riddle’s caption written below the image. I believe the six imprinted “published by A.J. Riddle, 1865,” are those that Riddle reprinted and offered for sale in New York City just after the war. You may see the name Theodore Wiseman, incorrectly cited as photographer, associated with some of these images. Wiseman later admitted that he found seven of these photographs “taken by A.J. Riddle” in the trunk of stockade commander Captain Henry Wirz, shortly after the prison was closed (Theodore Wiseman’s letter to the editor, The National Tribune, April 26,1883 p7 c6 is available in Library of Congress’s Chronicling America site). Wiseman published them illegally and sold the sets for $2.00 each. 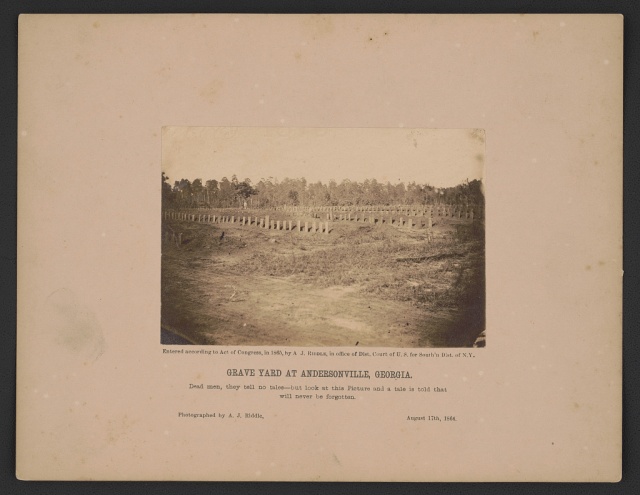 Many of the new entries in the Texas State Historical Association’s “Handbook of Civil War Texas” are further enriched with illustrations provided by the Lawrence T. Jones III Texas Photographs Collection. This collection in the DeGolyer Library at Southern Methodist University is another of my favorite collections of photographs. There are some amazing images to be found here. Check out this wonderful Texas-related photography collection, as well as the online Handbook of Civil War Texas.

I’ve written about Hugh Mangum in this blog before, in 2014, 2015, and last in January 2019. He was a turn-of-the-century photographer who worked in North Carolina and the Virginias in his temporary studios in towns along the railroad lines. Mangum is another southern photographer whose clients came from all racial and economic backgrounds. The book on his photoraphy, Photos Day or Night: The Archive of Hugh Mangum, was published in January 2019, by Red Hook Editions. It was edited by photo historian Sarah Stacke, with texts by historian Maurice Wallace and Mangum’s granddaughter, Martha Sumler. In Stacke’s article in this Washington Post article you can read about Mangum and his photographs (housed at Duke University), and see many of the wonderful  images he made with his Penny Picture camera.

St. Michael’s College photographs, beginning in the 1930s, pertain to the activities of the Society of Saint Edmund in the Southern United States, as well as South America. The Society worked in schools, parishes, and healthcare facilities in African American and Creole communities. Their Good Samaritan School of Practical Nursing was the first school of practical nursing for black students in Alabama. See the collection on the site Digital Public Library of America.

In 2010, the High Museum of Art in Atlanta commissioned photographer Shane Lavalette, of Burlington, Vermont, to create a series of photographs taken in the South for its 2012 exhibition, “Picturing the South”. His series was exhibited in the UK for the first time just last spring at Photo London, which is why the The British Journal of Photography published an article on Lavalette and his photographs. The BJP article is called One Sun, One Shadow , which is the title of the mongraph Lavalette published in 2017.

“When President Franklin Roosevelt created the Farm Security Administration in 1937 to mitigate poverty in farming communities, the agency notably contracted a number of photographers to document the lives of farmers.” That idea still is in place. The web magazine  The New Food Economy highlighted USDA photographer Lance Cheung’s images and interviewed him for an article that appeared a few months ago. 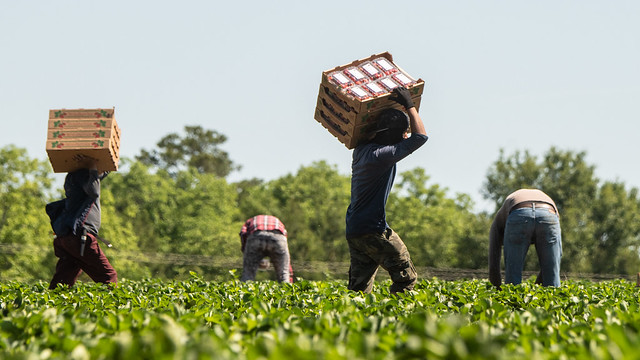 Cheung has documented farm life, federal programs, and the American landscape, as well as a number of other things related to agriculture and the land.  Among the things he has covered is the devestating 2011 Mississippi River floods. Of interest to Georgia is his documentation of the work of former Georgia governor, now Secretary of Agriculture, Sonny Perdue. Of course, many other Cheung photographs depicting agricultural subjects in Georgia and the south also appear on the Flickr site. About 100 photographs were taken last spring at a farm near Fort Valley, Georgia, seven months after Hurricane Michael. Explore the USDA Flickr site for yourself to see other Lance Cheung images, as well as those by the other USDA photographers. Remember that as government-produced photographs, these are in the public domain. 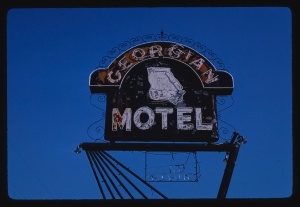 Many of the full- color photographs found on the Library of Congress website are those taken by Carol Highsmith (see my Wintery Tuesday Tips for more on her), but there are also similar collections in color located at LC. One of those others is the John Margolies Roadside America Photograph Archive. This collection of 11,710 digitized color slides is “one of the most comprehensive documentary studies of vernacular commercial structures along main streets, byways, and highways throughout the United States in the twentieth century.” The photos were taken 1969-2008, by architectural critic and curator John Margolies (1940-2016).

I hope at least one of these photographers working in the South excites you, and you will follow my hints to check out their images and information. And if you are located anywhere in the South during this very hot August, stay cool and stay hydrated!