The Unknown Women in Georgia Photography

My Georgia Photographers Documentation Project has one goal – to make those unknown persons involved in photography in our state more recognized as valuable participants in, and to, the history of the medium in Georgia, in the United States, and globally. There are none quite so unknown as the women who worked in the business of photography in our state — all those many women who also contributed to that history.

In March 2016, three years ago, I counted 190 women related to the profession of photography in my database of Georgia photographers. That was only five more than I noted in March of the previous year. This month, in March 2019, I have documented about 240 women in my database. This is a notable increase from the number I came up with in 2016. Although I posted several times on women involved in Georgia photography in both 2017 and 2018,  I apparently did not do a count of them in my database in either year!

You may have read about women photographers in this blog before — perhaps in my posts for Women’s History Month, Good Common Sense (March 2015) and Remember the Ladies (March 2016). On September, 26, 2017 and March 13, 2018, I posted the two-part Readers and Research, Women Photographers; Part 1 posted in 2017, and part 2 in  2018, focusing on particular photographers. The two-part Keeping Photography in the Family: The Reeves-Hearn Family of Photographers was posted in in 2015. In Part One and Part Two I discussed the two women in that family most involved in photography.

In at least one of those posts I mentioned that most of the women I’ve documented wore more than one hat – some worked in photography and ran, or were running, other businesses, many were also mothers, some were also artists, and/or retouchers. I try to document all women related to the profession of photography, and not only as photographers working alone, but within families (with sisters or brothers, with a parent, with a husband, or as his widow), or in partnerships with persons outside their family. I research and write about them as studio assistants, gallery managers, artists, retouchers, and photo printers, as well as studio receptionists, and those in the business of selling supplies to photographers.

In this post, both in honor of Women’s History Month and because I’ve never written about them before, I will tell you about a few more of these women. They were all working photographers in North Georgia — one is a single photographer, one is a widowed woman with children, and the last are two women who were in a long-time partnership. 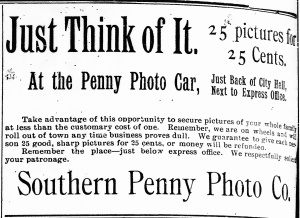 Frances C. Pfeffer (b. 1879) was a young woman born and raised in Gainesville, Georgia. She was the third daughter of Pauline and Federick Pfeffer (d. 1895), German immigrants who moved to north Georgia. A widow, Frances’s mother owned and operated the brick plant that had been founded by her husband. According to a news account (Jan. 18, 1902 Georgia Cracker p. 5) she employed up to forty men, and her company produced 25,000 bricks per day. In addition, Pauline Pfeffer had a “healthy and safe income,” and was “properly educating her children.” Even the tornado that hit Gainesville in 1903, did not slow her down.

With a strong woman as a role model, Frances was working as a photographer at least by 1900. When the census was taken that year she was noted boarding with a family in Monroe, just southwest of Athens, Georgia. Olivia Black was the head of the family with whom Frances boarded, and Olivia was a milliner — another woman, like Frances’s mother Pauline, in business for herself.

When she returned to Gainesville, the newspaper noted that Frances Pfeffer won first prize in the July 1903 photograph contest sponsored by Success magazine. Her prize-winning photograph was called “The Man with the Hoe,” and it depicted a small boy in overalls with a hoe in his hands, at work.

By fall 1903, Frances was running her Southern Penny Photo Car, situated in back of the Gainesville City Hall, next to the Express Office. She sold “25 good, sharp pictures for just 25 cents” and warned that “we are on wheels and will roll out of town any time business proves dull.” In January 1904, she moved her Photo Car on to Conyers, Georgia, a town between Monroe and Atlanta. The newspaper described her as “a cultured young lady” (although she was about twenty-five by then) who “is entitled to and deserves the success with which she is meeting.”

She returned to Gainesville with her photo car in October 1904. “She had splendid success” according to a news account, and the writer hoped she would re-open her photo car there in Gainesville – which she did. Before the end of October, the newly opened Southern Penny Photo Co. offered “25 Dainty Little Pictures, in five different positions, for 25 Cents. —- Do Not Miss This Chance —- Come At Once.” Miss Pfeffer was again located in back of City Hall, but she advertised she was now located “At Tent.” One month later she advertised that she would remain only a few days longer “owing to the great demand for the Penny Pictures.”

In late 1905 or early 1906, Frances moved to Birmingham, Alabama, where she continued to work as a photographer. After she was there about a year, she won two prizes at the Tri-State Photographic Association held in Atlanta. The first prize in the general class she won was a gold medal offered by Atlanta’s Southern Photo Material Company. The other prize was a certificate for another photo (Gainesville News, March 28, 1906 p.6 c.2). In 1911, for only one year, she was a partner to photographer Charles L. Palmer in the Palmer-Pfeffer Studio. She remained in Birmingham working as a photographer through at least 1915.

Frances Pfeffer probably gave up photography when she left Birmingham, and certainly before she moved to Atlanta, where she was living by 1919. Her older sister Louise followed her to Atlanta, and the two Pfeffer women worked at at the Atlanta Hemstitching and Plaiting Company. Louise was a seamstress, and Frances worked there, too, but from 1926 to 1929 she had her own business doing hemstitching. Frances stayed in Atlanta with the Hemstitching and Plaiting Company through the years of the Depression and World War II, and to 1950. She was over 70 years old when she retired, and she died in Atlanta on August 15, 1965 at about eighty-five years of age.

Mary A.[Obarr] Caldwell worked under the name of Mrs. O. C. Caldwell, in Lafayette, Georgia. She first advertised in September 1903, in the local newspaper, that she made photographs out of her residence, east of the square. She became Ottis C. Caldwell’s widow by the end of 1904, and became single mother of their three children ranging in age from one to twelve years.

With the help of her seventy-three year old mother Sarah, Mary was able to continue her photography business, and in June 1905, she opened her Photograph Gallery in the new Lumpkin building. That building on the southeast corner of the square was erected specifically for Mrs. Caldwell’s gallery by H. P. Lumpkin, and it was east of his own office.

In 1907, Mary Caldwell was doing well enough with her photography business to purchase a home of nine rooms “on the pike” for $3,000. She was asked by the builder, the city postmaster, to photograph it and she bought it from him.

“Mrs. Caldwell” continued to advertise her photographic services, including enlarging and framing.  Just like Frances Pfeffer did five years earlier, she began making the popular Penny Photographs (“25 for 25 Cents”), which she advertised during most of 1908. The last mention of her photo business was in early November 1910, when the Walker County Messenger noted that she gave a prize of a dozen large photos to the winner of a local Baby Show.

On Sunday May 12, 1912, Mary Caldwell married John M. Patterson, also of Lafayette. Mary, who was only forty-four, had by then given up her photo business after only eight years, possibly due to the competition from Chattanooga. Sadly, after an illness that lasted several months, she passed away on Saturday October 11, 1913.

In Atlanta the two women lived next door to each other, and they were partners in their photograph studio in the Grand Building. In spring 1920, the two women moved north to Clayton, in northeast Georgia (Rabun County), where they purchased the J. C. Green cottage on College Hill. They advertised their Lake-Atkins Studio as “on the Hill,” and in addition to taking photographs, did Kodak finishing, made postcards, and sold views there for about two years.

To scout a location for a new studio, the two traveled to Cedartown, Georgia in September 1922.  The following month they chose to purchase the studio of photographer J. S. Reese. In this new Lake-Atkins Studio, which was in Polk County, quite a distance from their home in Clayton, they advertised “artistic photography.”

After only a few months in Cedartown, they returned to Clayton. Their last advertisement in the Clayton Tribune appeared in 1924, and it seems the women closed the business around 1925. After Edith and Annie closed their studio, they remained in their Clayton home on School Street through at least 1940. In all, they lived in Clayton, Georgia, about twenty years.

I have no idea how or when the two women met prior to their work in Atlanta. In 1910 Edith was in Denver, Colorado, working with an older sister, Eleanor, and her niece Eugenie, as Baking Powder demonstrators, and Edith may have cut most ties with her remaining family by the time she and Annie went into business together.

Edith is very possibly the daughter of Ohio-born Benjamin B. Lake (1837-1901), who briefly worked in Columbus, Georgia, as a photographer, and in about 1897 was the partner to his son-in-law (I believe) as Lake & Stanley.  After “Ben” B. Lake’s retirement, his son J. [Joseph] Banning Lake (born 1870), who would be Edith’s younger brother, also worked in Columbus, Georgia as a photographer, 1898- 1899. He left Columbus to work as a photographer in Lafayette, Alabama. He was in that city only about a year before he died, a suicide, in 1900, leaving a widow and young daughter.

By 1945, Edith Lake and Annie Atkins, who were in their 70s, were living in Dade County, Florida, in the Miami area, and appear in that city’s directory through 1947. I am thus far unable to find death dates for either woman.

I hope you enjoyed getting to know a few more of our women working in Georgia photography, just a few of the many working throughout the state. If you have information on any of the women mentioned here, I would love to hear from you. Please comment on this post, or contact me via email.

© E. Lee Eltzroth and Hunting & Gathering, 2019. Unauthorized use and/or duplication of this material, including her photographs, without written permission from this blog’s author is prohibited. The piece can be re-blogged, and excerpts and links may be used, provided that full and clear credit is given to E. Lee Eltzroth and Hunting & Gathering, with appropriate and specific direction to the original content.

← Be My (Photo) Valentine
Spring into Summer Tuesday Tips →