It’s another Halloween! Pumpkins are fine, but ghosts, witches, skulls, and headless bodies are kind of scary….. 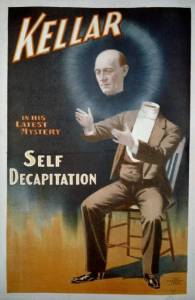 Or are they? More fun than scary to me.

A headless man! Harry Kellar was a magician born in Pennsylvania to German immigrant parents.  After quite an interesting life he retired in 1908. Harry Houdini, who had followed Kellar’s career closely, called Kellar “America’s greatest magician,” and in 1917 he convinced Kellar to come out of retirement to perform one final show for charity.

The headless body portrait has been used by photographers for quite some time. A bit of manipulation in the studio, and voilá! Off with your head! You  have read about spirit photographs and bodiless heads here and there in my previous Halloween blog posts. 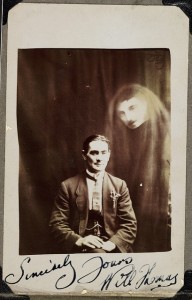 William Hope, photograph of Will Thomas with an unidentified spirit, ca. 1920; National Media Museum Collection, Inventory no: 2002-5054/04. Thomas, a medium from Wales, did not recognize the superimposed image. https://tinyurl.com/yaegct9y

There is a series of photographs online that were taken in the early 20th century by William Hope (1863 – 1933). He was a controversial medium living in England who founded a group of six spirit photographers who called themselves the Crewe Circle. An investigator suggested that Hope was using glass plates “bearing ghostly images” and passing them off as spirit photographs, but none other than Sir Arthur Conan Doyle came to Hope’s defense. Read more about Hope here.

Witches, Sorcery and Evil Spirits!! What would Halloween be without them?

The 1922 Swedish-Danish film, Häxan, is based on non-fiction works, mainly the Malleus Maleficarum, a 15th-century treatise on witchcraft. The director, Benjamin Christensen, used a documentary style, utilizing photographs of statuary, paintings, and woodcuts. The film was banned in the United States, as well as some other countries. It is doubtful that would happen today. A jazz version was released in 1968, narrated by William Burroughs. The original is fairly long, but take a quick look at The Witches or Witchcraft Through the Ages (Häxan’s English title). Some of it is more humorous than scary by today’s standards. The devil is played by director Christensen.

The author, 1957, Frankfurt, Germany, photo by R. T. Eltzroth; clown suit made by her mom.

I hope you enjoyed this short Halloween post, although it has nothing directly to do with Georgia photographs or photographers. It is always worthwhile, and enlightening to look at many images, isn’t it?

I wish you as much fun in your hunting and gathering of goodies for yourself or your kids tonight as this little clown, wearing her home-made costume, appears to be having in 1957!