Trick, or Treat? Photographs on Eyes of the Dead, of Ghosts and Spirits

Mystery creates wonder and wonder is the basis of man’s desire to understand.  Neil Armstrong

So often in the past several years as I did research on Georgia photographers, I ran into somewhat unusual, but photograph-related articles.

Halloween seems a good time to share these attempts of our ancestors to understand the wonder.

Articles that ran in the Macon Telegraph of 16 April 1896 on page 8 and in the Augusta Chronicle of 15 Dec. 1898 on page 3 carry the headlines “Pictures on Dead Eyes” and “Images in Eyes of the Dead.” The first of those, which ran in the Macon, Georgia newspaper in 1896, reports on an article that originally ran in the New York Herald.

Can the Photograph of a Murderer Be Obtained From the Retina of the Corpse?

And the Augusta, Georgia newspaper article of 1898 gives a preface to a report that ran in the (London) Lancet.

Images in Eyes of the Dead. Scientific Experiments Give Rise to Absurd Stories

Each of these headlines is followed by a statement assuring the public that the newspaper, and certainly not their readers, believes this notion of photographs appearing in the eyes of the dead.

Once more we are confronted with the legendary belief that the eye of a murdered person may retain a permanent image of his destroyer …. a belief which has more lives than the traditional cat.

Here is the theory on which the belief rests: The human eye is a camera obscura. During life the retina acts exactly like a camera acts. …. In death–the last picture that is impressed on the eye remains there …. if reproduced, will show the last object upon which [it] rested.

The article continues to describe various stories and tests that gave credence to the belief. Favorite parts of mine are:

when the photographer was invited to produce his pictures before unbiased witnesses, no one could see anything in them save an indistinct blur.

[the eye] is a camera such as may be seen in summer at Coney Island … there is no such sensitized plate in the human camera ….The retina would have to be taken out and cleaned off like a slate.

The popular notion that the eyes of the dead sometimes retain complete images of scenes that have been enacted before them at the moment of death has received fancied confirmation in late years by experiment, and there are some who, from reading careless or exaggerated accounts of these experiments, might get an impression that science had placed upon this notion the stamp of approval.

Which is followed by the Lancet report that a doctor and an “enthusiastic” photographer had tested “the amount of truth in the theory that Dead Eyes retain complete images” and they had tested the eyes of “hundreds of dead people.”  The photographer said although images of persons weren’t found, images of letters, objects, and numbers were. Experiments of a Mr. “Kunne on the visual purple of the retina” is cited which further explains (to the article’s author) that it is possible to develop an image on an eyeball within twenty-four hours.

These articles must have appeared in newspapers across our country as well as in other countries. I found another one in Google Newspapers which reports on similar experiments and relates them to two different murder trials that were in the news.

They are reviving the theory that a murderer may be detected by the eye of his victim.

An 1895 article that appeared in the Atlanta Constitution on 15 May, page 9, reprints a Pensacola, Florida report of May 14th about the death of a young man named John T. Wilkerson.

Wilkerson was hit by lightning when standing next to a telegraph instrument. It was disconnected, but he hit a loose wire which was connected to a tree.

it was found that a perfect picture of the pine tree from the top to the point at which the wire was tied was photographed on each [of his] sides, just underneath his arms. The photographs are said to be absolutely perfect.

I recalled reading about these imprints sometime in the last few months, so I was able to find some pictures for you. This actually does happen, but today we know better than to call this is a Photograph. The images on a man hit by lightning in 2011 is probably what the images on Wilkerson looked like  http://tinyurl.com/lel6ap3

Sometime in early 1892 the city of Macon, Georgia “went wild over a woman’s dream.” She dreamed she saw her mother

who begged that her daughter go back and live with her in the future, and that she would be on the wall of the room in which she was sleeping.

She and her husband searched for the mother. There were several framed pictures on the wall, which she took down, including the picture of her mother

and on the removal of this picture a most remarkable sight was presented. On the calcimined wall in distinct outlines and wonderful accuracy of light and shade appeared the portrait of the dead woman ….. compared with the photograph [of the mother] and the resemblance pronounced startling. …. C. Y. Woodall, the photographer, was called on to photograph the wall, which he did, making one of the most remarkable pictures he ever made.

OK, I am waiting for that Woodall photograph to come up for sale on eBay! 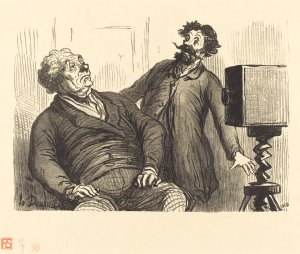 On 20 April 1875 the [Macon] Georgia Press printed on page 8 some information on this story a few days before the “joke” was told. The Atlanta Constitution reprinted “The Veil Lifted,” from the Rome [GA] Commercial on 25 April (p.3 col. 6) with all the details. A spiritualist, Col. Hay, was

making the Roman eye to open wide in astonishment and the Roman underlip to drop in mute bewilderment, as he held familiar converse with the spirit world….and had ghosts “knocking about” Rome generally.

Here is where it gets more interesting

But the most puzzling manifestation of the Colonel’s was the taking at Murphy’s gallery of a spirit photograph and the photographic printing of a written spiritual communication.

Photographer W. D. (William Daniel) Murphy (1834-1928) and his assistant, a Mr. Bradley, participated in making a spirit photograph of Mr. Hay using a young woman as a “spirit.” Dressed in a “ghostly robe,” she stood behind a screen, then came out and stood behind Hay – he never saw her. She raised her hands above his head, and Mr. Bradley took the photo, leaving the cap off the lens for a few seconds, then replacing it. The woman left, the lens cap was removed again for Col. Hay’s picture, “with the vague, spiritual picture of the young lady standing behind him.” The photograph was then shown to Col. Hay and he said it was his niece, Miss Sallie Green, who died years ago in Mississippi.

Next Murphy put a “communication signed S. P. and addressed to Dear Uncle” in front of the camera lens. It said that she would not “materialize” again.

Thus does the spiritual phenomena produced by Col. Hay tumble to pieces, knocked over by a few facts.

There is more than a passing mention of Boston engraver, William H. Mumler, on the sites mentioned below.  In 1861 he claimed to have taken photographs of ghosts. In 1869 he was finally charged with fraud. There is quite a lot of information available on Mumler, and all of it is fascinating.

Lastly, there is an online exhibit called “Do You Believe? A Ghostly Gallery” at The American Museum of Photography site with many photographers’ images of “spirits” and a link to more Mumler information and photographs. http://tinyurl.com/yz7g5n2

In closing I must tell you about something I came across as I did some research for this post. I am a film buff, and I ran into a Wikipedia article on a French film called Death Watch (La Mort en direct), which came out in 1980. It is classified a science fiction film, and directed by Bertrand Tavernier.

The synopsis is – a TV cameraman has a surgical procedure which implants cameras behind his eyes. Everything he sees is relayed back to his Television station, and they use these scenes, from his “eye camera,” as the basis for their reality show.

But, and there is always a but, he will go blind if he experiences darkness, so he uses drugs to stay awake – he can sleep briefly, but only with his eyes open, so he carries a flashlight to shine into his eyes at night!

This really makes me think eeeeccch but now I really must see this movie – it sounds pretty memorable, and it could cause bad dreams, but what is Halloween for if not to get a good scare going? http://en.wikipedia.org/wiki/Death_Watch

So, keeping that in mind, to all my readers, have a Happy Halloween, and keep your eyes open!

← Tuesday Tips – Research News You Can Use
Veteran’s Day, and Monday Mystery Photos →