A Military Mystery for Memorial Day 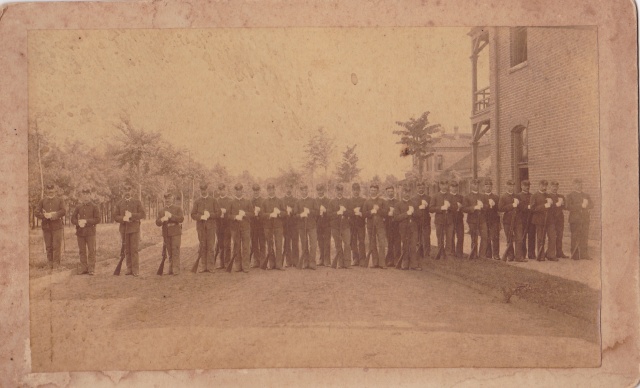 On this Memorial Day, I want to discuss a photograph made of members of the military, stationed in Atlanta, some of whom may or may not have lost their lives in service. This photograph is somewhat a Mystery to me, and because it is a Monday, and another Memorial Day, this seemed an opportune time for me to deconstruct the image. I may be neglecting the obvious, and I welcome your comments and corrections.

I purchased this photograph, an oversize card of 5 1/4″ x 8 1/2″,  about three months ago. It was identified by the seller as “Group of Soldiers Atlanta, Georgia – Post Civil War Militia Photograph,” but how accurate is that? The photographer’s mark is just barely visible, and I was pleasantly surprised to realize that this is an early group photograph made by Atlanta woman photographer Linnie Condon, aka Mrs. L. Condon, aka Mrs. L. Condon-Hendrick. Noted on the back of this photo in four pale lines is “Mrs. L. Condon / Artistic Photographer / 83 1/2 Whitehall St. / Atlanta, Georgia.” Condon, who arrived in Atlanta from Louisville, Kentucky, was located at this address, her first address in Atlanta, from only September 1890 to sometime in 1893. By 1894 she had moved her studio to 28 1/2 Whitehall Street.

Linnie Condon became well-known for her in-studio portraits of Atlanta society before her death in March 1909. In her early years as an Atlanta photographer, she took some group portraits in the outdoors. In the Linnie Condon photographs held by the Atlanta History Center  are some made outside the studio. I wrote about her before in reference to a Veteran’s Day Monday Mystery. I know now that the young man was part of the 4th (see below).

There are experts in military identification who can give more, and maybe more exact, information on the uniforms these soldiers wear and the equipment they carry. Although the image shows too little detail and I cannot see patches or buttons, I have tried to look closely at the uniforms and equipment depicted, and compare them to those items found on Survey of U.S. Army Uniforms, Weapons and Accoutrements .

I think these are the soldiers’ dress uniforms, maybe not full dress, but at least service dress. The men wear the pre-1895 forage caps which carry the crossed muskets insignia worn by Infantry from 1875, until the end of the century (with only minor changes). They all seem to be wearing the Pattern 1880 Mills Cartridge Belt, with the Pattern 1873 Bayonet Scabbard suspended from a brass wire double hook adapter, best seen on the two (officers?) on the far left without rifles. These items were being worn by U.S. Army soldiers as late as 1891, as depicted on page 42 of Survey–, and apparently still were when this photograph was taken.

The rifle they carry could be the Model 1884 with the long range Buffington rear sights, mentioned on page 49 of Survey–. Competition for a new rifle for the Army was not held until 1892 and production did not begin until 1894.

I believe this photograph was taken at Fort McPherson. Much of the following history is derived from my copy of Fort McPherson – The First Hundred Years, 1885-1985 (prepared by Staff History Officer, Fort McPherson, Georgia, 1986). The site had been in use since the mid-1830s as a militia drill and parade ground for the state militia, and as the Civil War approached it was used as a training center for which the Confederate government erected barracks. It became known as The Post near Atlanta, and as of 1866, became known as The Post of Atlanta. On April 11, 1867, it became headquarters of the Third Military District, and at the end of December 1867, it was designated McPherson Barracks. Named after Union Major General James Birdseye McPherson, Atlantans called it the “Yankee garrison.” The McPherson Barracks buildings, north of the Lee Street side of the later Ft. McPherson site, were sold at public auction in 1881, and part was purchased for the Atlanta Baptist Female Seminary, today’s Spelman College.

Congress approved purchase of land and buildings in March 1885, the current site was chosen and additional land was authorized in August and September 1886. On May 4, 1889, it officially became Fort McPherson. The first two batteries of the 4th Artillery began arriving from other posts on May 26, 1889, followed by regimental headquarters, the regimental band, and seven more batteries. There were originally only 294 enlisted men and twenty officers in residence.

This photograph was taken a few years later, about 1891 or 1892, perhaps to celebrate this company finally in residence, and the completion of the two-story troop barracks. These barracks were built of red brick, and a two-story veranda ran the full length of the buildings, both front and rear. These buildings formed Troop Row, which was parallel to Staff Row, with the parade ground between. The end of the two story building in the photo looks like the end of a building on Troop Row to me, and the trees are the very likely the young ones planted that grew into the many beautiful trees I remember seeing on this post.

As an Army Brat, I spent my early years in and around Ft. Mac, and it was always called Ft. Mac by anyone who worked or played there. I remember going to the PX (Post Exchange), the movie theater, and most important for me, the Library, which I visited every Sunday with my father, then stationed at Ft. Mac.  It was so sad to see it be decommissioned in 2011. I know there are plans for the site, but I worry about the 40-50 buildings, including the Victorian homes, on the National Register of Historic Places, and what what will become of them. The post covered nearly 500 acres, was a huge part of Atlanta’s history, and provided employment to hundreds of Atlantans. I noticed many years before it was closed that it was being left out of filmed histories of Atlanta. Historic buildings and sites have been overlooked, and often demolished in Atlanta far too often. Perhaps that is the reason I left the big city?

© E. Lee Eltzroth and Hunting & Gathering, 2018. Unauthorized use and/or duplication of this material, including photographs, without written permission from this blog’s author is prohibited. The piece can be re-blogged, and excerpts and links may be used, provided that full and clear credit is given to E. Lee Eltzroth and Hunting & Gathering, with appropriate and specific direction to the original content.

← Mothers, by Georgia Photographers
Research Tips For Your Spring into Summer →