Today is Veteran’s Day. I want to remember those who, like my father and my father-in-law, gave of themselves when they were called. They were lucky and came home, but the adjustment must not have been easy for either of them. It cannot be easy for any of the men and women who are military vets, not those of the past, like our dads coming home from WWII, and not those of the present, returning from service in conflicts they had no part in making. Think of them today, and think about how precious life actually is.

Today’s post is a reworking of one I did several months ago for Memorial Day. The three photographs from my collection that I used in that post are in this post, too, but I have added two of my newer ones, each of which is a bit of a mystery – so there are three images to challenge you! Here they are in chronological order. 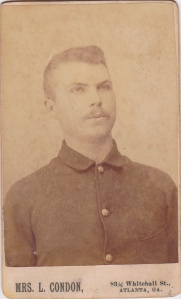 This rather strange carte-de-visite is of a soldier wearing what, I deduce through my research, is the standard issue U.S. Army shirt, ca. 1890, but with absolutely no insignia.

The carte-de-visite has a notation on the back: “Rance, of.g.4 Ar[m]y year of 1891,” so is that possibly a rank given? It is a mystery to me! But it is an early example of her Atlanta work, and valuable to me for that reason.

Mrs. Condon, who was in the process of divorcing husband Thomas Condon, arrived in Atlanta late the previous year from Louisville, Kentucky where she had been working as a photographer.  She paid her first photographers’ tax in Fulton County in November 1890.

Condon’s first Atlanta address was 83 ½ Whitehall, where from late 1890 into 1893, she was  working out of a studio she rented from the well-known artist, teacher and china painter, William Lycett.  Mrs. Condon was the first of many photographers to whom Lycett, and his heirs, rented the room above his business and studio.  Linnie Condon died suddenly in March 1909, and William Lycett, who supposedly took his own life, died in April 1909. More fodder for my novel based on her life….

Below is another interesting image, for many reasons. Obviously a “joke” photograph, the group includes men in parts of their army uniforms, a few in most of their uniforms, a man in a police uniform, children in zouave uniform costumes, and some are, or acting as, musicians; the man in the front in a fez and turtleneck, baffles me. It is noted on the back of the card that this is “Savannah, GA 1896,” and the only other word I can see is (possibly) “Ritter.” This boudoir-size cabinet card was made by Wilson & Royall.

Savannah photographer J. N. Wilson was well-established (see the card back mark detail below) and he and newcomer Martin Royall were partners only briefly. Royall is listed in the Savannah city directory only in 1896, and that is the only year the partners’ paid a photographers’ tax in Chatham County.  J. N. Wilson died in February 1897, and Martin Royall disappeared. He is a bit of an enigma to me, so it will take more research before I can tell you much about Martin Royall.

J. N. Wilson will get a post of his own one of these days, I have a lot of documentation on him as well as his son Michael E. Wilson who carried on the business. Another son, J. N. Wilson, Jr. worked with his father, then his brother for a few years, and when he reported for duty at the start of the Spanish American War, he was recorded as a photographer. 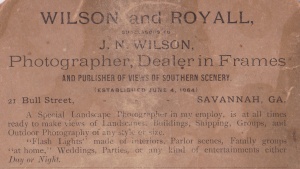 Of the three photographs I used in my prior post, two are related to the Spanish American War, and the other was apparently taken just after World War One.  The two images below are details of stereograph views of soldiers at Camp Chickamauga, Georgia, made by the Keystone View Company, copyrighted 1898 by B. L. Singley.

The first (#9233) called “Bouncing a New Recruit” is a fun one and a favorite in my collection. It has fine light and dark sepia-tones. 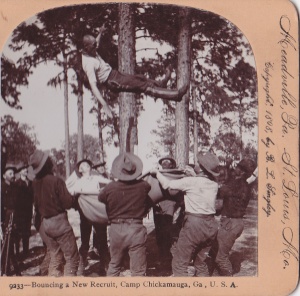 The second (#9231) is not quite as good an image, faded, but with information on the who, what, when and where within the title, “Dinner in Camp – Battery E, 1st Regiment”.

The Chickamauga and Chattanooga National Park had only recently been created when the area was chosen to play a useful part in the Spanish American War. Chickamauga, Georgia, was near to the Chattnooga rail line, thus a good place to gather the troops and prepare them for service in Cuba, etc.

B. L. Singley (Benneville Lloyd Singley, 1864-1938), a photographer, began the Keystone View Company to sell his Pennsylvania stereo views. Later his company began to sell views from all over the country. As of about 1898, Singley was no longer sole photographer and he hired others to work for him. Keystone also began making and selling stereoscopes in 1898, and in 1905 the company was incorporated. With that act it became the largest business of its kind in the world, with branches in the United States, Canada, and England.

The Keystone company was in business a long while, from 1892 through 1963. These two views above are fairly early ones for the company  which had only been in business six years – they were then only located in Meadville, Pennsylvania and St. Louis, Missouri. These could be photographs Singley himself made, and it’s true that they are copyrighted in his name only, but we just don’t really know – yet –exactly who may have taken these 1898 photographs at Chickamauga.

Another Georgia military view, in the Keystone-Mast Collection at UC Riverside (California), is called “Reviewing Infantry at Savannah Ga., 1899” http://tinyurl.com/nrgqely

There is more information on Keystone at: http://tinyurl.com/bogz4qb

The third of my mystery photos is this photo postcard below, postmarked “Atlanta March 1919” and captioned “3002. – Infantry Drill – Port Arms.” These are African American soldiers, and I cannot help thinking that in only a few months, during the summer and fall of 1919, our country would be in the midst of several race riots in cities across the country. Three of the most violent ones occurred in Washington D.C., Chicago Illinois, and Elaine, Arkansas. This was the height of the Jim Crow era.

But the name of the person sending the card is not the only mystery to me.  Where were these soldiers stationed? It is an Atlanta postmark and could have been anywhere in the surrounding area. I haven’t done in-depth research on this item, but it would be wonderful to know the circumstances surrounding this photograph.

That is all for now, I hope these images of our military were interesting to you, and you have had a little time to reflect on the meaning of Veteran’s Day.

As usual, I wish you the best of luck to you in your Hunting and Gathering, no matter what kind of research you do!

← Trick, or Treat? Photographs on Eyes of the Dead, of Ghosts and Spirits
Monday Musings – Share that research! →