A Photographer Fourth of July

It’s July 4th and a time to celebrate this great country of ours. But of course people are born and people die on this day, just as they do on any other. On this particular date, two interesting Georgia photographers were born, and another one died.

Augusta photographer Daniel F. Tanner died there today in 1880; he worked in Augusta about twenty years, ca. 1857 to 1877.  Atlanta photographer Tracy B. Mathewson was born today in Pickens County, Georgia in 1876. After leaving Augusta, where around 1900 he sold bicycles, he worked as a news photographer, and later as a motion picture photographer in various locations, but out of Atlanta from 1910 into the mid-20th century.

I am going to concentrate on that third photographer, George C. Drummond, and tell you his story.

George Clark Drummond was born July 4, 1840, probably in Winslow, Maine (this 1840 birthdate is from the Maine birth and christening records, but other records cite 1841). He was one of at least eight children, and prior to his arrival in the state of Georgia around 1870, George C. Drummond enlisted in Company G, Maine 3rd Infantry Regiment in the spring of  1861. He was promoted to Corporal, then to 4th Sergeant, and he was mustered out on June 28, 1864.

According to an article written at the time of his death (Atlanta Constitution of April 27, 1918,  page 9), he and his older brother fought on opposite sides in the Civil War.  George, of course, fought for the Union, but the unnamed brother enlisted in and fought for the Confederacy. If you would completely believe the article, neither knew the other was in the army of the foe, but both fought at Gettysburg and Spotsylvania.

On the 1860 Maine census, the 19-year-old George, a farm hand who apparently worked on his father’s farm, is shown with only one older brother, listed as William E., a 21 year old clerk.  Huh, we think, where would he have clerked there in rural Maine?

It turns out that his older brother was actually named  Edward William Drummond and he was in Savannah, Georgia after that Winslow, Kennebec, Maine census was taken in June. Apparently Edward had been to Savannah before and  he was in that city in time to be counted on the August 4, 1860 census. He was at that time  a clerk in the Commission House, so that is where he was clerking!

Working and living in the South, he may have felt it was natural that he serve the Confederacy (or he had “succumbed to Southern ways,” according to the news article). He enlisted in the Georgia 1st Infantry Regiment (“Olmstead’s”)  in August 1861, and he was eventually in what became known as the Chatham Artillery; he was promoted to full Major on 25 Jul 1864. 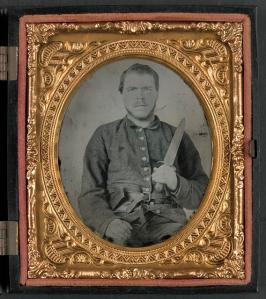 Ambrotype by an unidentified photographer of an unidentified soldier in a Georgia Confederate uniform,  with a double roller belt and Bowie knife; courtesy Library of Congress, Prints and Photographs Division; LC-DIG-ppmsca-37410

Edward Drummond was back in Savannah after the war, and he is listed in the 1866 city directory as a merchant, boarding at Mrs. Dixon’s on Drayton Street; he had married her daughter Mary Ann in June 1860, and they named their first son George (George William Drummond, born in Savannah in 1861 applied for membership to the Maine Society of the Sons of the American Revolution; his form verifies his heritage).

Although George was listed in Savannah in 1870, he may not have actually been living there, and the city directory is often compiled several months earlier. By the time the 1870 census was taken in Atlanta that June, George C. Drummond was counted there as an Artist. He first appears in the Atlanta city directories in 1871, under Ambrotypes, and his gallery was upstairs at 40 Whitehall. In 1872 he’s described as a ferrotypist, and that remained his description until he was listed in 1876 as doing ferrotypes and photographs. Although in 1874 he was listed as working at 42 Whitehall, and by 1876 listed at 40 Whitehall and in 1877 again at 42 Whitehall, these locations are basically the same.

His brother Edward W. Drummond died in September 1876. Called Major (but as “E . L.” ) in his obituary (Savannah Morning News September 28, 1876 page 3),  it indicates he came to Savannah in about 1858, when he was about twenty.  Only the week before  his death, he and his wife lost three of their four children to a yellow fever epidemic (SMN September 20, 1876 page 3). Only their older son George lived. Edward’s obituary mentions  his parents and sisters in Maine, and his brother living in Atlanta.

By 1878 G. C. Drummond was out of the business of photography. The death of his only brother, a niece, and two nephews must have been quite a blow, and perhaps he reconsidered his career. In 1879 he was working as a commission merchant, by 1880 as a grocer,  by 1900 as a landlord, and by 1910 in real estate. He died in Atlanta at his residence in the Majestic Hotel on April 24, 1918, widowed, with only his daughter Wilhelmina, called “Willie,”  listed as his survivor.

Very soon the gallery was known as Sanders & Ivie’s Ferrotype Rooms, but by 1879, Ivie was working on his own, at the same location. Ivie did very well as a photographer in Atlanta, but he died  too early, on Oct. 20, 1886 – he had just turned thirty-seven. Here is a link to his monument in Oakland Cemetery – my favorite photographer’s grave marker. http://tinyurl.com/mw6hmsj

There are always loose ends to tie-up on these fellows, and it is difficult to admit that it really isn’t necessary to know absolutely everything, and I should quit the pursuit. Although there is more about the Drummond brothers to know,  I hope you found this an interesting story. All our lives are interesting, but oh, those photographers are downright fascinating!