July 7, 2014 · by gaphodoc · in photo-history, photographers, Research · Leave a comment

The post below, originally published on June 16, 2014, suddenly disappeared from this blog. I am using the copy of the post saved by the ever wonderful and resourceful Frances Robb, and I am so grateful. Stay tuned for news here of the publication of Frances’s book on Alabama photographer which will be coming out soon.

It has been an amazing week for those of us addicted to researching people (their lives and whereabouts), places (the where in that whereabouts), or things (what IS that thing and what was it used for?).  In other words, it was a Wow Week for us. I imagine the kids above are giving each other a High Five, don’t you?

I know my friends and family consider me strange because my heart goes pitty-pat and thumpity-thump when I discover yet another new wonderful, available website, a forthcoming book relating to my multiple interests, or my research is found useful to someone else.

I really do not know where to begin, so I have divided this post into several sections to make it less confusing both to you and to me.  I will be giving you the Wow on recently made available Photo books, Photo collections & Photo projects; Newspapers; Online Resources;  and Some Other News (including some of my own).

In my post on Texas in my series “Researching Photographers Working in the South” http://wp.me/p3wX4F-9w  the very first collection I discussed was the one at Southern Methodist University.  Anne E. Peterson, the curator of photographs at SMU’s DeGolyer Library has shared some wonderful news. They have recently been given a significant collection that is not online yet.  The George W. Cook Dallas/Texas Image Collection will be a great resource for research in Dallas and Texas history. This collection has over 2,200 photographs and 12,000 postcards, many real photographic postcards, as well as manuscripts, diaries, albums, banknotes, ephemera, books, pamphlets, and broadsides, 1829 to mid-1950s. Wow! Believe me, I will be able to find things there that are related to Georgia photographers.

While you wait for that amazing collection to come online, bide your time with a look at their “Texas: Photographs, Manuscripts and Imprints” to which they add regularly.http://digitalcollections.smu.edu/all/cul/tex/

I was invited to add to an exciting ongoing project to attempt to find out just how much information you can get out of one single image.  This project is coordinated by Alan Griffiths, who produces the lovely and useful (or useful and lovely depending on how I feel) site, Lumious Lint  http://www.luminous-lint.com

I posted the project link to Twitter last week using the question “How much information can we extract from a single carte de visite?” See if you, too, can add to this “living document” project. tinyurl.com/oqobcxh

Photographer Raymond Smith’s exhibit, “In Time We Shall Know Ourselves,” has opened at the Montgomery (Alabama) Museum of Fine Arts. His book by this title, with essays by Alexander Nemerov and Richard H. King, will be out soon.  It contains 52 photographs he took on a three-month road trip in 1974, and the jacket illustration is his photograph “Rural Highway, Southern Georgia,  After Rainstorm.”

We Georgians are quite lucky that this exhibit will come to the Georgia Museum of Art, on the University of Georgia Athens campus, on October 25, 2014, and will be up until  January 5, 2015.

Speaking of the University of Georgia, the UGA Extension Service, via the Digital Library of Georgia, has released the first in a series of historic farm photos. http://tinyurl.com/pdaq9vx “With at least one agent in most of Georgia’s counties, UGA Extension agents and their photographers have produced a collection of more than 60,000 sleeves of negatives.”

You can see how some of these photographs have been used in the online exhibit celebrating the UGA Extension Service’s centennial. http://tinyurl.com/nt6uwga Another veritable cornucopia of useful images.

You may remember that when I cited an addition to the South Georgia Historic Newspapers in my last Tuesday Tips post, I told you that I had my fingers crossed that the Digital Library of Georgia would soon make the Savannah newspapers available.  Well, guess what? They did!! Announced this past week are the addition of three newspaper titles published in Savannah,  1809 – 1880: the Savannah Georgian (1819-1856), the Savannah Morning News (1868-1880), and the Savannah Republican (1809-1868). http://savnewspapers.galileo.usg.edu/savnewspapers-j2k/search

The interesting thing you may notice about this particular set of newspapers is that they look  “a bit different” than the others in the DLG set.  This is because they are made available in PDF form.  I have a new MacBook Pro and although I can see the “hits” from my query, I have not been able to actually SEE the newspapers themselves because each of these sites require a plug-in. That plug-in is only usable to those with olderMacBooks!  Of course, these newspapers are available to all Windows users, and I have had to continue to use my old desktop PC to view and print from these wonderful, valuable DLG newspapers.

Well, happy day, now I can actually do that on my Mac! Viewing the PDF is not a problem if you have an Adobe reader installed. When I told the DLG folks how pleased I was about this, I found out that – Ta Da – they will be converting all the newspapers to PDF form! Next to be converted will be the Athens newspapers (5 different newspapers, 1827-1928) which should happen next month, in July, and after that, this  Fall the Atlanta newspapers (14 newspaper titles, 1857 to 1922) will be converted. I assume the conversion of other Georgia newspapers on their site will follow in 2015.

I could not wait to get into these Savannah newspapers, and I immediately did a simple search with the word “photographer.”  That led me to the expected several pages of hits, but right at the top was something I did not expect to see and did not have. It was the announcement of the dissolution of the partnership of the Savannah photographic firm of Wilson & Havens. 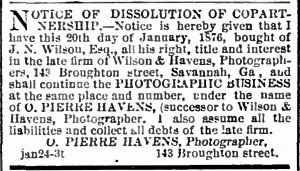 J. N. Wilson & O. P. Havens were not partners for that long, probably less that two years since they dissolved their partnership as of January 20th. They first joined in 1874, so I hope to also find the announcement of the partnership formation in these newspapers.

Wilson had a number of “bad patches” in his lifetime, with ongoing financial problems, so it is not surprising that Havens took over the debt as well as the studio. Wilson always bounced back, and worked as a Savannah and area photographer until his death in 1897.

The announcement that The Signal, Georgia State University’s student newspaper, is now digitized, came right after I posted my last “Tuesday Tips.” This group of newspapers includes The Technite, the Evening Signal and the Junior Collegiate. These begin with 1926 issues and more are being added daily.  Take a look at these newspapers at http://digitalcollections.library.gsu.edu/cdm/landingpage/collection/signal

Once I get the hang of how these searches and results work, I think these newspapers will provide useful information for a post I hope to have up later this month on Camera Clubs in Georgia.

Here are a few items I wanted to include last week, but did not. There are many sites similar to these pointing you to various collections, but it is always good to know about others.

Terry Abraham, via the University of Idaho Special Collections, has compiled is a list called Repositories of Primary Sources. This list has “over 5000 websites describing holdings of manuscripts, archives, rare books, historical photographs, and other primary sources for the research scholar.”

The list is worldwide, and it has been updated regularly through 2013. You will note that Mr. Abraham asks for corrections and additions, so perhaps some of you will be able to assist in keeping this updated for 2014.  http://webpages.uidaho.edu/special-collections/iil.htm

Kimberly Powell on About.com Genealogy posted a newsletter with the title ” Where Are the Records? Resources for Ferreting Out What’s Available” – and a good title it was, Kimberly.  One section highlighted is “U.S. State Archives Online: Online Record Collections, Finding Aids & Catalogs”

Don’t forget that for Georgia only, you can also use the Directory of Historical and Cultural Organizations at http://apps.georgiaarchives.org/GHRAB/   I  had at least two paperbound copies of the Directory before it went online and I hope I finally culled those from my collection, I’ll have to look!

Regarding the latter, I lately came into possession of a carte de visite made in Columbus by an artist and photographer I  thought I knew quite a lot about, J. M. Tomlinson (1835-1898).

In brief, he worked in Atlanta in 1854 and 1855, as a decorative artist (Plain, House, Sign, Passenger Car, Fresco, Coach Ornamental and Decorative Painter), and in 1858 as an artist for photographer C.W. Dill. By late 1859 Tomlinson was in Augusta working for photographers Tucker & Perkins.  He worked briefly in Alabama in 1860, and came to LaGrange, Georgia where, other than leaving for  Confederate military service, he spent the remainder of his career as a photographer and art teacher. 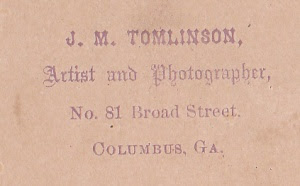 Detail of a back mark on a carte de visite made by James M. Tomlinson, Columbus, GA ca. 1872; author’s collection

I did not know J. M. Tomlinson ever worked professionally in Columbus. I did know he had been involved,  as Civil Engineer, with drawing maps of the Columbus, LaGrange & North Georgia Railroad lines (he later filed suit for payment), but finding this item was a pleasant surprise. The carte itself is not in good condition, but oh, having that back mark is great!

You may recall my post on the artist Lee Mallory, “How Did Lee Mallory, Panorama Artist, Entrepreneur and Photo-Artist, Die?” http://wp.me/p3wX4F-ao  His death is still a mystery to me, but he is a fascinating character. Prior to his arrival in Macon, he traveled with his panoramas throughout the south, and somewhat beyond.

Recently, the Northeast Document Conservation Center (NEDCC) announced that they were working on the Garibaldi Panorama, created by John James Story, who although British, would be contemporary with Lee Mallory. Story’s panorama is among the longest paintings in the world, and the script is extant as well. Wow, if only a Mallory panorama (and script) would be found!

I am giving you this link not only because it interests me, but because these paintings do relate to photography and did influence photographers, particularly the very early ones, and it is in our best interest to be aware of them.

Not only had lesser known photo-artists like Lee Mallory painted them, but no other than Louis  Daguerre himself was an artist of the moving diorama, cousin to the panorama. The fact that Daguerre’s Diorama toured the United States in 1841, is no small matter.

Another plus for my research is the addition of the Georgia death certificates for 1930 – 1938 to to the free site FamilySearch https://familysearch.org/ More Georgia photographers’ death dates to find, and other information on them! Yes, I know,  it’s odd what excites me…..

Now that they are under the umbrella of the University System of Georgia, have increased the staff, and have increased their hours there is no reason to put off your visit!  I continue to love the look of their much improved, slick website – if you still haven’t done so, take a look http://www.georgiaarchives.org/

That is about it, and quite enough, right? Although all of this may not be new news to you, I hope you had at least one Wow moment. And I hope your research and reading and hunting and gathering this coming week gives you some personal Wow moments.