They’re creepy and they’re kooky, Mysterious and spooky, They’re all together ooky, The Addams Family!

Whenever I think about Atlanta photographers with the surname of Adams, the theme song for the TV show “The Addams Family”  comes to my mind. The song was written and composed by Vic Mizzy, and it was also used in the two movies based on the television show, and used in other contexts. No wonder it is so familiar to me, it’s not just that I am getting older, and tripping down memory lane.

I think of that particular song because they can be a confusing bunch, and they certainly can be “mysterious [and] kooky.” I was recently asked if I knew anything about any Atlanta photographer by the name of Adams, other than J. Q. Adams. Well, I knew there was another, Hugh, but until I was getting ready to answer the question, I had not considered that there was another company having to do with photography which had Adams in the corporate name. I think there are other people who can be confused by these Atlanta people named Adams who worked in the field of photography. And I am almost positive there are some descendants of these several persons named Adams who are curious about them, too.

With the addition of more information in order to flesh these Adams folks out, what follows is what I was able to tell Fred about the “Adams Family.”  Sources for my information: the Atlanta city directories, articles and advertisements in Atlanta and other newspapers, photograph front and back marks , vital records, cemetery records, and the U.S. Federal census.

A September 1898 newspaper advertisement for the Adams Photo Supply Company

Hugh B. Adams was born in 1865, and died in Atlanta on Dec. 9, 1916; he is interred in Oakland Cemetery. There is an image in the Vanishing Georgia photograph collection that is marked “J.H. Kuhns & Hugh B. Adams” leading one to believe Hugh was a professional photographer. According to both the 1887 Atlanta city directory and the 1900 U.S. census Hugh Adams was a stenographer with the W & A Railroad. 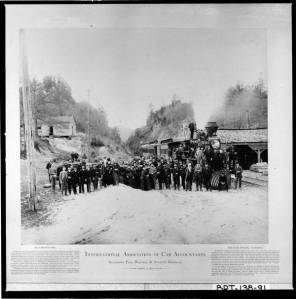 Photo by J. H. Kuhns and Hugh B. Adams; April 13, 1887, the Western and Atlantic railroad special excursion from Chattanooga to Atlanta for the members and families of the International Association of Car Accountants. The train stopped at Alatoona Pass. Vanishing Georgia #brt138, Georgia Archives, University System of Georgia

Neither census record for 1880 or 1910 list him as a “photographer,” or even having a related occupation. I believe Hugh B. Adams was probably what I would call “an accomplished amateur” photographer. There is another photograph I know of  by him, reproduced on page 53 in Women in Atlanta (Atlanta History Center, Arcadia Publishing, 2005). It is of an outing of the Dixie Club, a social group, and the photo is of some members enjoying themselves at Vinings, in May 1889. Hugh B. Adams was probably a member of this organization and he took the photo of this small group.

The announcement in the August 8, 1895 Atlanta Constitution states that J. Q. Adams had been associated with that firm, and had now “bought the entire interest,” and was “preparing to make it one of the best equipped photo studios in the south.” Because the Motes brothers were running the company, this now makes perfect sense.

Adams retained the  Atlanta Photo Company name through 1895. As of 1896 he had renamed it the Adams Photo Studio, and it was known by that name through 1910. Below is an example of the photo mark J. Q. Adams used during his transition period, when the name of his business had not quite changed. 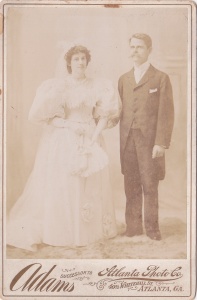 From 1913 through 1920,  J. Q. Adams was listed in city directories and advertisements in partnership with well-know Atlanta photographer William M. Edwards, a son of J. D. Edwards, and his successor. This partnership was known as the Edwards-Adams Studio, and it was located at Adams’s address at 40 ½ Whitehall St. until 1920 when it relocated to 130a Peachtree Street, NW.

In 1922 J. Q. Adams was no longer listed as partner to Edwards, but he was working for Edwards & Son at their Peachtree Street address. This was the last year they (Edwards & Son) were listed as a going concern. When John Quinton Adams died at Grady Hospital on November 21, 1927, his occupation was given as photographer and his business address was given as 130a Peachtree Street  on the death certificate, so apparently he retained that studio. 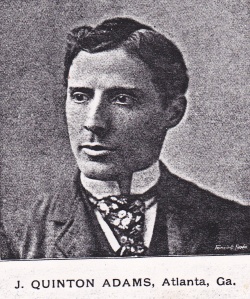 Although he was never again listed as a photographer in those later city directories, J. Q. Adams name did appear in the 1928 directory, at the Peachtree St. address, and that directory came out after his death.

Sadly, J. Q. Adams died in November 1927,  from injuries received from an automobile accident in which his skull was fractured. He had been widowed in 1903 when his wife Martha died, and he never remarried. He and Martha had no children, but Adams remained close to his sisters and their children.

A footnote: (and I will save these stories for another day when I will attempt to unravel the details for you in another post)

To complicate matters, the city directories list the Atlanta Photo Co. with C. [Charles A.] Kuhns, proprietor in 1900, and in 1903 C. A. Kuhns is listed as photographer, and in the 1900 city directory (actually reporting on 1899), the former Atlanta Photo Supply Co. name was being used. Now you feel you’ve fallen into the proverbial rabbit hole, and it becomes “curiouser and curiouser.” The company was managed out of the studio of well-known society photographer Mrs. Linnie Condon, at 28 ½ Whitehall Street. It was supposedly managed by her soon-to-be-second (possibly third) husband Ambrose L. Hendrick, whom she married on April 9, 1899. Ambrose was not the best husband, and an even poorer manager, and he was fairly soon out of the picture.

Until next time, keep hunting, keep gathering, and I really hope all your characters are not named Adams!

← More News You Can Use, Tuesday Tips
A Photographer Fourth of July →