Tuesday Tips – More Research News You Can Use

I was able to attend the Henry D. Green Symposium on the Decorative Art this February, although I had been iced-in the two days before — I was lucky in that I am only a few hours away from Athens and the University of Georgia campus. Because of the weather, flights were cancelled, so speakers were slightly out of order. A speaker from Rhode Island was unable to get out of her state; a flight South would not happen until the day after the Symposium closed, but her paper was delivered by an excellent substitute.

The theme this year was “Connections: Georgia in the World.” This was the seventh Green Symposium, but it was only my second. I attended the one just prior (2012), and I knew then that this gathering of scholars (including many Independent Scholars – hooray!) from all over the country, is where I wanted to be again in 2014.

The Green Symposium is held every two years, and in the intervening years the Georgia Museum of Art publishes the most recent Symposium presentations in a soft cover book form. I have all but one of these fine publications. This year I purchased the latest book, the 2013-issued “Homecoming.”

That publication includes two articles related to my research on Georgia photographers and their associates. One article is on the Geechee people and their culture as depicted in the beautiful hand-tinted lantern slides made from Orrin Sage Wightman’s photographs taken in Glynn, McIntosh, and Liberty counties Georgia.  The other is about Atlanta’s Lycett Studios and in particular, china artist William Lycett, who I recognize also as an amateur photographer and a landlord to a series of Atlanta photographers.

On Saturday, we were privileged to have Daniel Ackermann, Associate Curator at the Museum of Early Southern Decorative Arts (MESDA, speak. MESDA is part of Old Salem Museums and Gardens, in Winston-Salem North Carolina.

Ackermann shared some wonderful news with us. I knew their database was coming online, eventually, but I did not know that their Craftsman Database had come online, digitized through a partnership with University of North Carolina at Chapel Hill.  As of New Year’s Day – in January 2014 – it was available for use and this is exciting news indeed!

You will note that the Museum itself includes

decorative arts objects from the three regions of the early South: the Chesapeake, the Low Country and the Backcountry and includes objects from North and South Carolina, Virginia, Maryland, Kentucky, Tennessee, and Georgia.

And the Craftsman Database is a

Collection of primary source information on nearly 85,000 artisans and artists practicing 127 trades in the early South.

Contains information [that was] gathered through primary research in public and private records about artisans [who were] working in the South before 1861.

It includes information on craftsmen of color and women. In fact, it is

A significant resource that offers unparalleled access to documentation about women and African Americans, both enslaved and free. And because each craftsman’s record is linked to a specific geographic location and date, the database enables a clearer understanding of the migration of craftsmen in the South.

So, you ask, what in the world does this have to do with photographers?

As you may remember reading in this blog, many Georgia photographers were also jewelers and/or silversmiths and/or watchmakers (see my previous post “Jeweler-Photographers, Photographer-Jewelers, and a Dentist or Two” .

Daguerreotype portrait of a watchmaker seated at table with watches, 1840-1860; DAG no. 1195, LC Prints & Photographs Division

Early Georgia photographers were also artists, miniaturists, portraitists, sign painters, etc. Some were also carpenters and frame makers. The Database includes needle workers, cabinetmakers, surveyors, builders, blacksmiths, potters, glass makers, plasterers, and so much more.  In addition to slaves, indentured servants and apprentices are included. And there may be more than one “card” entry per person. It is up to you to make the connections. I have already located one early daguerreotypist who I knew had trained as and became a jeweler (he later became a dentist – silver, silver, and silver again!).

You can access the Craftsman Database on the menu to the left on the link given above, and you can even download a PDF of their Index of the MESDA Subject Database if you like.

I have come across photographs of Georgia furniture-makers, etc. and their names may possibly be here. I want to know about the subject of the photograph, but only if I can afford to spend the research time involved. This Database can make researching some of those early photographs a bit easier.

Have fun with this great resource, whether you seek information on early American artists or craftsmen or on your ancestors, or on a sometime photographer.

After my previous Tuesday Tips post, “Newspapers & Indexes Off-the-Beaten- Path,” I was contacted about the availability of some Valdosta newspapers. I had not known about these. I certainly will use these indexes to search for information now that I know where they are.

This nice addition to those “off the beaten path” Index Sources comes via Deborah S. Davis, Archivist at Valdosta State University’s Archives and Special Collections. Thanks Deborah! 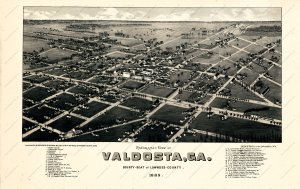 A companion to the issues of the Valdosta Times, 1905-1912, found on the Digital Library of Georgia’s South Georgia Newspapers site would be GENDEX, which is a now digitized notebook of vital records in the Valdosta Daily Times from 1868-1945. There are also copies at the South Georgia Regional Library, and The Lowndes County Historical Society Museum.

For death notices/obituaries, engagement, wedding, and birth announcements from 1945-1964, see the Valdosta Daily Times Vital Records Index  This index is ongoing and will be brought up through the present.

Information on the index to The Valdosta Daily Times from 1994 and after, and on the VSU Archives annual index to the Times (they create an annual index), is a good place to start.

Also of interest, complements of Valdosta State, are two other Indexes. There is an index to the Southern Patriot (a progressive newspaper covering Civil Rights and the Labor Movement published in South Carolina, 1942-1973) and there is an index to the Campus Canopy, the Valdosta State student newspaper, for 1935-1942 (called the Campus Canopy through 1969, and renamed The Spectator in 1970). See also their digitized annuals, The Pinecones, and Milestones.

On his site The Ancestor Hunt, Kenneth R. Marks has compiled an excellent”Summary of Alabama Online Historical Newspapers.” This includes many free and some subscription sites (subdivided by city name) holding digital copies of the state’s newspapers. I certainly plan to refer to this list – Georgia and Alabama often shared photographers.

Marks and others have noted that many, many freely accessible newspapers were added to the Library of Congress Chronicling America site recently. Newspapers added from the South include those for Maryland, D.C., North Carolina and South Carolina. Georgia is not covered well on CA, but we are very lucky – we have the wonderful Digital Library of Georgia newspapers online and free.

That is “all the news” I saw “fit to print” for this week. I really hope you find something useful here to help you in your own Hunting and Gathering.

© E. Lee Eltzroth and Hunting & Gathering, 2014; updated 8/2017 and 10/2020. Unauthorized use and/or duplication of this material without  written permission from this blog’s author is prohibited. The piece can be re-blogged, and excerpts and links may be used, provided that full and clear credit is given to E. Lee Eltzroth and Hunting & Gathering, with appropriate and specific direction to the original content.

← The Elephant in My Room – Saturday Stats
An African American Itinerant Photographer, Friday’s Face from the Past →