September 11, 2013 · by gaphodoc · in Artists, photo-history, photographers · Leave a comment

In the early days of the “art of photography” in this country, jewelers and photographers often worked together, either sharing studio space or trading or selling one another supplies and silver. It was not uncommon for a jeweler to apply his skill in one line of work, to another.

Daguerreotypes began to be used as a component of jewelry by the 1850s. The development of microphotography meant one could have brooches, pins, bracelets, and even buttons made with a small daguerreotyped image inserted. Illustrated above is a beautiful daguerreotype of two hands, one black, one white, possibly posed on a Bible. This daguerreotype pin was used as a symbol of the Abolition Movement and it is possibly the earliest political button to utilize photography. It was probably made to raise money for the abolitionist cause and it may have been sold at an antislavery lecture or fair. You can see (below) that the pin was made to attach to a piece of clothing.

Even the well-known owner of one of the largest photograph galleries in New York City by the 1850s, Jeremiah Gurney, was previously a jeweler and jewelry store owner. It is from Gurney that Columbus photographer Andrew Jackson Riddle, in 1857, purchased the rights to produce and sell in Georgia the Hallotype, a type of colored ambrotype with a “three-dimensional” effect.  I will do a separate post on Riddle, a photographer about whom much has been written, but I think I can add some interesting tidbits to the Riddle canon.

Among the earlier jewelers associated with photography in Georgia are T. T. Wilmot of Savannah, Sidney B. Day, B. L. Burnett, and the brothers W. B. and E. J. Johnston of Macon, Whitby Foster, Samuel B. Purple, C. L. Depew and T. C. Willard of Columbus, and Willys (or Willis) Catlin, George Rackett and Horace Clark of Augusta. These men, all jewelers, dabbled in the art of the daguerreotype, some more successfully than others, and many, as landlords, rented work space to daguerreotypists.

In early March 1841, the newspaper editor of the Columbus Times (11 March) wrote that Fogle & Echols “have put into operation in this city, one of these – things – we do not know what else to call it; by which a correct miniature likeness is taken in a few minutes…. one of the most wonderful of the effects of the scientific discoveries of the age.”  This is one of my favorites of the sometimes flowery prose coming from early Georgia newspaper editors. On March 24th , another editor, this time of the Columbus Enquirer, described going into the “studio, not of the artist, but of the machine …” to have his Daguerreotype made “at the Jewelry store of Mr. Fogle.” Read below his expressive article from page 2 of that issue (click to enlarge).

I believe Mr. Echols is probably Josephes Echols who became a partner in a Columbus cotton factory by the mid-1840s. John Jacob Fogle (1803-1874) had apprenticed in his native North Carolina as a jeweler. He became a jeweler in Milledgeville, then a jeweler in Columbus, Georgia where he was a partner to Whitby Foster from 1833 to 1837.

In addition to his jewelry business, in March 1841 he briefly tried his hand at daguerreotypy, as he began selling parts of his jewelry business. In 1843 he began advertising himself as a dentist, a somewhat related occupation using metals, which he continued. In December of that same year, a daguerreotypist named Reuben Lovering, a former Plumbe’s Boston operator, advertised his work “at Mr. Fogle’s rooms, East side Broad street.”

Fogle is only one of many jewelers, watch makers and silversmiths, as well as dentists, who are linked to the art of photography in the state of Georgia. This professional association continued into photography’s second generation, which I consider to begin about 1862 and continuing the next twenty years or so. For an easy to remember cutoff date I use 1885.

These second generation photographer-jeweler-watchmakers include M. L. “Mat” Richter of Madison (1874-1924), a jeweler and photographer who was a son of Charles Richter (d.1884), a Madison jeweler & watchmaker. M. L. Richter trained with his father but later worked as a photographer as well as a jeweler in Madison. From 1866 to about 1910, he often advertised himself as a photographer-jeweler. Although he took many photographs, and many carte-de-visite bear his mark, both his death certificate and obituary note only his work as a jeweler. Richter was active in the Madison community and held various political offices, including that of mayor.

Henry A. Cordes (1835-1893) of Washington, a German immigrant, did not work as many years as a photographer as Richter did. Working as a silversmith and watchmaker, his carte-de-visite were marked “Photographer & Practical Watchmaker.”  You can see his business sign on Washington’s Main Street in a photograph on page 54 of Robert E. Willingham’s Washington, Georgia (Arcadia Publishing, 2000). http://tinyurl.com/3mnbzp9

A veteran of the original Irvin Guards, he fought at Gettysburg and was active in the Irvin Artillery Survivors Association until his death. Cordes is discussed in The Sumter Flying Artillery, a book by James L. Spreicher (Gretna, LA: Pelican, 2009), which also has several other references to him. http://tinyurl.com/oftc7o9

John M. Lunquest (1812-1896) of Macon, Griffin, and several other cities, crosses from the first into that second generation. Lunquest was an occasional jeweler sometimes practicing dentistry and quite often, photography.  He had two sons, Magnus, who began as a photographer and became a dentist, and Benjamin, who became a jeweler.

As early as 1847, John M. Lunquest advertised as a daguerreotypist in Milledgeville, working first with a partner named B. J. Lester, then working on his own. By July 1850, he was working with C. W. Parker in Macon, making Daguerreotypes put into jewelry “in any style desired – in Medallions, Bracelets, neat or very fancy cases…” . Their advertisement was published in the Macon Georgia Telegraph, this one (above) is from July 9, 1850 on page 3.

Lunquest was living in Griffin before 1850, by 1854 he was working there as a daguerreotypist, and by 1859 as a “doctor” (dentist). By October 1858, he was advertising in the Atlanta Weekly Intelligencer as a “Surgeon and Mechanical Dentist” on Whitehall St.  He apparently did this into March 1859 when he ceased advertising – I love the set of (false?) teeth he used in those advertisements (see below). He later worked in Atlanta again in 1876 and 1877, but strictly as a photographer, while his son Magnus worked in that city as a dentist.

In 1863 Lunquest was in back in Macon advertising his New Dentistry Office, and noted to the public that he also took Ambrotypes “when unengaged.”

I have been able to document J. M. Lunquest working in Cuthbert in 1867, and there also from September 1869 to February 1870, although he may have worked there that entire time. In September 1869 he began advertising his photography in that city but also noted that he could have “Watches, clocks and jewelry repaired in the best manner. All work warranted.”

I know that Lunquest was working in Thomaston as a photographer in the 1880s, but apparently he was also there in 1872 as a dentist. That is the year he was put on the state Dental Society’s Committee for Mechanical Dentistry (Atlanta Daily Sun, 6 April 1872 page 4).

By 1880 he was in Barnesville, and according to the census taker he was again working as a jeweler.  In the 1881-1882 state business directory published by Shole’s, he is listed as a photographer. We can assume he continued working in both professions as was needed, or as it suited him.

By 1918 the art of photo jewelry had become a bigger business, with whole companies devoted to it. The H. M. Hauer Company of Pittsburgh, PA specialized in providing jewelry to photographers and photo suppliers, saying of themselves that they were “The Only House Making a Specialty of the Photo Jewelry Line in its Minute Details.” This business came about because of what they called “the rapidly increased demand for photo jewelry.”

Their 1918 catalog included non-photographic jewelry that could be “handled in connection with the photo line.” They also did hand-painting of photographs, and would take “certain persons” out of a group if the photographer sending the photo would “mark that person with an X.” Yet another example of early Photoshop! 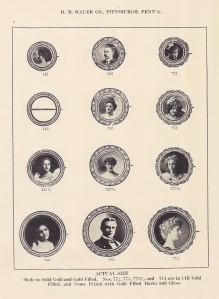 In closing this post, I want to recommend a book to you if you have any interest at all in Georgia silversmiths, jewelers, or watchmakers (who were sometimes photographers and dentists). That book is The Silversmiths of Georgia by George Barton Cutten (The Oglethorpe Press, 1998). It includes Kitty Farnham’s March 1971 article from Antiques Magazine, “Early Silversmiths and the Silver Trade in Georgia.”

Cutten also produced books on the silver trade in other southern states, but I am only familiar with his Georgia book and it is well worth seeking out. Check your public or academic library, or purchase it from a used book dealer.

If you want to buy it, I would recommend buying from Biblio, a North Carolina company (keep your money in the South, as some of the nineteenth century photographers would advertise). I had an online book business for about six years and Biblio is the company I would rather deal with as a seller, and as a buyer. This is my personal opinion, of course, but that is my recommendation. http://www.biblio.com/

A newer, useful publication to look for is the catalog from the exhibit From Sideboard to Pulpit – Silver in Georgia, which was held from November 19, 2005 through March 26, 2006, at the Georgia Museum of Art, University of Georgia. It was co-curated by Ashley Callahan and Dale L. Couch, and the catalog was published in 2005.

These secondary sources are great jumping off places for your research into the primary sources. I believe you will enjoy your hunting and your gathering of information on these related occupations. So, that is it until next week, when I will post another of my series on “Researching Photographers in the South.”