An African American Itinerant Photographer, Friday’s Face from the Past 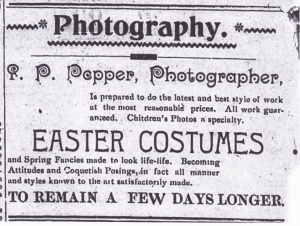 For the last few years, when I have the time, I have been researching a man named F. P. Pepper (Fremont P, and I believe the “P” may stand for Philip; born about 1855). He is a man who was an educator, a husband, a father, and a photographer. I still have queries out to various people and places about him, but due to other commitments, I won’t do more “with him” for awhile. I decided I should share with you what I do have. Please forgive me for leaving out some detail, and there is a lot of detail on this fellow!

He is unique, I think, as a person of color who worked as an itinerant photographer in the state of Georgia.  He becomes more and more interesting to me as I uncover more about him, but I still do not have enough to get a full picture of the man. Was he free, or born into slavery? Where did he die, where is he buried?

There were other African American photographers and associated workers, both men and women, in Georgia from the late 19th to early mid-20th century but none of the nearly sixty persons (and partnerships) I have documented thus far would I consider an itinerant. All of these people were working in one place, sometimes in two, but they were all resident photographers, printers, colorists, etc.

I have seen questions posed online about families’ cabinet card photographs which are marked “F. P. Pepper, Photo Artist.” People who have these photographs want to know where this photographer may have worked, and when, in order to place their family in a particular place and time. From these questions, from his advertisements, and from the few photographs I have seen, I know that he had both black and white customers.

In ten years I have only noticed one image for sale marked with Pepper’s imprint, although I certainly do not see everything. F. P. Pepper’s work is in three family collections that I know of, but there must be many more out there! I hope this post will bring those others to light.

The photographs I have actually seen, other than the “for sale” item, I’ve seen only online. They are:

1) In a book called Legacy – Seven Generations of a Family (2010), Yvonne Foster Southerland used a few photographs made by Pepper that are in her family. You can see some pages of that book on Scribd but you may not be allowed to view the parts that include a Pepper photograph(s) http://tinyurl.com/k4ko332

Southerland’s book is available to purchase from Amazon in print or in Kindle format. I bought a copy for Google Play some months ago, but that one may no longer be available. If you peruse a portion of the book online, you will find it very interesting.  It is the story of an African American family with deep Georgia roots, including those to a prominent white family.

2)  On a Rootsweb  site for a white family, the Albert Sidney Dix family, two F. P. Pepper photographs are located under the subheading “Back to Bullock County”  http://tinyurl.com/mato3kx

The Dix family believes at least one of these photographs was taken in about 1896 in Bullock County, Alabama.  If Pepper made them in Butler, Taylor County Georgia, where the family re-located, it would coincide with Pepper’s known work area. It is true that he likely did work in nearby Alabama, there has always been a business connection along the Georgia- Alabama line in the area called the Chattahoochee Trace, and Bullock County is only a little farther west.

Through newspaper articles, advertisements and various other records, I have been able to tell that F.P. Pepper concentrated his business primarily in the smaller towns of southwest Georgia, and the southern part of west central Georgia.  He took photographs in the Georgia counties of Dougherty, Sumter, Turner, Marion, Dooly,  Terrell, Macon, Talbot, and probably Taylor and Randolph. 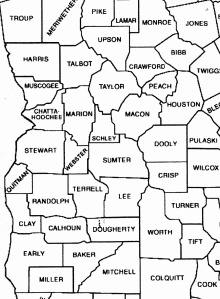 In 1884, Fremont Pepper was referred to as “a colored artist” who had pitched his tent in Dawson (Americus Recorder, 11 Nov. 1884 p1). On February 10, 1888,  the Atlanta Constitution reprinted an item from Albany, entitled A Colored Photographer. The article referred to Pepper as “the first colored photographer who ever came to this place” who “has been here about a month.” He had pitched his tent upon Washington street “and hung out his specimen pictures.”

Later that year, from the (Albany) Weekly News & Advertiser of 15 December 1888, I learned that:

F. P. Pepper, The Colored Photographer, Has purchased of W. F. Prather his portable gallery, including a full set of instruments, and will carry on the business at the old stand on Broad street. He is an experienced artist, and guarantees satisfaction. He makes a specialty of Cabinet Photographs, and his facilities for turning out good work are equal to any. Call and examine work and get prices.

W. F.  Prather was a photographer, a sometime itinerant who worked in at least seven locations. He had been in Albany only a few months when he sold his “portable gallery” to Pepper.  Prather had worked in Athens, Augusta, and Harmony Grove (Commerce) between 1884 and 1888. He established a gallery in Athens in 1883, and in Macon in 1887. He traveled to and worked in Albany, Americus, Athens and Dawson while he had his Macon gallery.

Prather and Pepper would certainly have crossed paths, or at least been aware of each other before their business transaction in late 1888. Pepper remained in Albany from 1888 until sometime in 1900, but we also know that he worked outside of Albany as a photographer during that time. 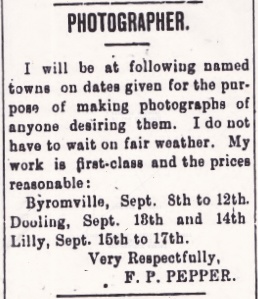 Now, to that other side of his life. Two articles that ran in May and July issues of the 1889 Albany Weekly News and Advertiser indicate that he was “a highly respected colored teacher,” and a Professor, along with W. C. Green, at the “Colored Academy of Albany,” a part of the public school system. It is interesting to note that F. P. Pepper is on the 1870 census as teaching school in Clinton, Jones County, when he was only about fifteen.

And, more importantly, he is cited in the Centennial Encyclopedia of the African Methodist Episcopal Church, volume I (1916; page 344) as the second president of Payne Institute, an AME high school in the southwest Georgia city of Cuthbert, in Randolph County. The Institute was founded in 1879 so I assume that F. P. Pepper was in Cuthbert around 1883.

Being in Cuthbert at that time is further documented by Pepper’s attendance at the “Colored Convention” (on education) held in Atlanta in December 1883. “F. P. Pepper, Cuthbert” was on the State Committee from the Second District. W. C. Green, with whom he would teach five years later, represented Albany in the same District. (Columbus Daily Enquirer-Sun 15 Dec. 1883 page 1).

Can we assume he took photographs in Cuthbert? I would, but I have no evidence – yet. In 1884 he was very near Cuthbert, in Dawson. Would he still be working at Payne Institute?- probably. It was not until 1912 that the name of the school was changed to Payne College, one of four institutions that were part of newly created Morris Brown University (Payne College is now in Augusta, GA).

There is a four year gap in my documentation before I found him at work as a photographer-teacher in Albany, but in this city we begin to know something about his wife and children. Four news articles of 1888 and 1889 mentioning him are rather interesting, to put it mildly. In true late nineteenth-century fashion, he is discussed in glowing terms as a “fine specimen of the best class of southern negro,” and a man “of deep study and peculiarly gifted.” It appears the editors were surprised at this “colored man” being an educated man who did very well on their examinations for teachers.

One news article states he attended Atlanta University for two years, but that he did not graduate. It is also stated that he ran for a district judgeship in Alabama, and became disgusted with politics. I have yet to try to verify these enticing tidbits.

He had a son, Ulysses, who was written about when a bully attacked him, and Pepper’s son fought back. In glowing terms, again, the author writes of the “heart” of Pepper, who paid for the prescription for the injured bully-boy, “manifesting his kindly disposition.”

Ulysses (d. 1924) was the oldest of four boys born to Fremont P. and his wife Ida, between July 1875 and September 1892. Possibly sons, Ullysses and Julius, born 1875 and 1880, were hers, not his; it is Pepper’s next son Fremont (b. 1883, still living 1949), who was named after him. He and Ulysses were working as carpenters as of the 1900 census (a profession they continued; I believe their probable paternal grandfather, James had been a carpenter).

Fremont’s mother was also working, as a schoolteacher, in 1900, but his father was not living with them. F. P. Pepper, at census time, was in Buena Vista, Marion County, working as a photographer.

Both Ida and F. P. are noted on the 1900 census as Married, but ten years later, in the 1910 census, both are recorded as being Widowed. Ida and her sons remained in Albany, F. P. was in Unadilla, Dooly County this census-time, boarding with a family, and working as a photographer.

I have not found a record of divorce for F.P. and Ida, and I doubt that there was one. I think it was a probably a mutual agreement. Photographer Pepper enjoyed being on the road, running his own business on his own schedule, and Ida wanted him home in Albany. Or, at least that is my theory! He already was a traveling photographer, and he had a home base;  it was after he left Albany that he began his route through south central and southwest Georgia as a true itinerant photographer.

Notice. I have been reliably informed that Geo. E. Sutton is travelling around Dooly County standing people against fences and trees, and claiming that he is connected with me in the making of photographs.

He is connected with me in no way.

I have spet too many years in building a reputation for excellency in my chosen work to have my reputation injured by a novice.

I won’t go into detail on my ideas about why his probable parents and siblings, in 1880, are in one place (Bibb County) and he in another (Muscogee County); why he was working as a farm laborer, when ten years earlier he was teaching; whether he may have had a twin, James — or if it is possible that in 1860 a slave owner named F. S. Pepper in Calhoun County, just west of Dougherty County, included among his three, four, and seven year old male slaves,  a boy named Fremont.