Readers and Research: Another visit to Photographer H. W. Brown 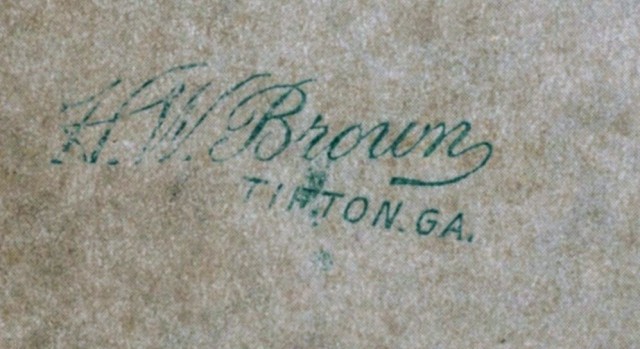 Several months ago, I heard from someone about photographer H. W. Brown, in response to my 2014 post called Georgia Photographers, Oh My Stars! In that post I discussed Brown and his work as a photographer at length. This person shared with me a number of photographs of the Howard W. Brown family, all made by Brown, or made in the Brown Studio by an assistant.

It is wonderful to have actual photographs of this man. I had only newspaper reproductions of him to use in my prior post. He was quite a dashing gent, with a dark handlebar mustache. That look comes across in his advertisements, in which he sometimes used his own image, but actual photographs better convey the appearance of this gentleman-photographer.

He and Katherone “Katy” Mary Funk were married in Fitzgerald in January 1904. Both their families had lived in Kansas and they perhaps even knew each other before moving to Georgia. As noted in the 1900 census, Katy Funk (b. 1877) was living in Fitzgerald, Georgia, and was the 22-year-old head of a family consisting of her five siblings. She was born in Indiana, but her sister and four brothers, including one pair of twins, were all born in Kansas. Their parents were were living in St. Augustine, Florida in 1900, where their father, a carpenter, may have gone for work.

In 1900, Howard Brown (b. 1866, in Kansas), photographer, was living with his parents, in Fitzgerald. Howard’s father, S. Clay Brown (b. Dec. 1832; d. 1915) was collecting a pension from his military service during the Civil War as a major and surgeon in the Union Army. A photograph of him attached to his Find a Grave record makes it obvious that the handlebar mustache ran in the family. 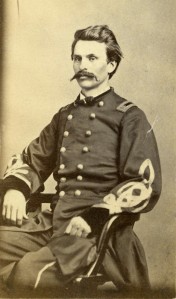 Harry and Molly Funk, like the Browns, likely heard about the unique and newly-formed city of Fitzgerald, Georgia, and decided to make it their home. The town certainly was new, it was established in 1893 and incorporated in 1895, as a place for both Union and Confederate veterans to unite to build a city, farm the land, and work at trades.

Katy and Howard Brown had two children, Howard Jr., who was born in 1905, and Bessie, born in 1908.  When I revisited my newspaper accounts on photographer H. W. Brown, I noted for the first time that in March 1909, when Howard left to take a sick aunt home to Indianapolis, Katy took charge of his Tifton, Georgia studio, assisted by photographer Etta M. Hooks.

H. W. Brown is said to have used his children as models in his novelty postcards, which depicted giant watermelons on tiny carts and railway cars, giant ears of corn, and pumpkins. Two were described in the Tifton Gazette (Aug. 20, 1909 pg.8) as showing “Will Kent’s dray, hopelessly mired down under the weight of three giant watermelons, which look as big as the body of either of the horses….another shows three giant ears of corn, as long as the body of the dray, and making a full load.” I haven’t seen any of those novelty postcards using Bessie and Howard, but my reader has shared some of the sweet photographs as postcards that he made of his children. Their mother, Katy, often mailed these postcards to her favorite aunt,  Belle Funk Pierce. 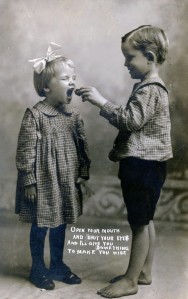 In 1940, according to the Federal census, Howard was working as an etcher, and his wife Constance was a special librarian (persons after my own heart!). They were living in Chicago, where his family had moved by 1920. He eventually served in the military, obtaining the rank of Lt. Colonel.

Much less is known about Bessie D. Brown. She is a twelve-year-old on the 1920 census living with her family (but listed on the next page).  She is not listed with the family in 1930. She would have been about twenty-two, so she was probably living on her own, and possibly married. She has not yet been located in Chicago or elsewhere, in 1930 or after.

Howard W. Brown died on March 17, 1940, in El Paso, Texas. During his lifetime, while he was a practicing photographer, he was also the secretary of the Tifton Board of Trade, Tifton city engineer, ran for Tift County surveyor, and was president and director of the Tifton Concert Band. In addition, he was an entrepreneur selling artists’ reproductions,  frames, moulding, mat board, Passe Partout Binding, Kodak supplies, French photographic plates, wallpaper, and even perfumes as an agent for the California Perfume Company. When he left Georgia and moved to Chicago, and then moved to El Paso, he did  not work as a photographer but as an assessor and auditor. Katy Brown outlived her husband by thirty-two years and died in 1972, in Dallas, Texas.

I hope you enjoyed getting to know the family of a Georgia photographer, and that you will revisit the 2014 post to learn more about H. W. Brown, his work, and the three women he employed. I have enjoyed the hunting and gathering of information on this family, and I appreciate the kindness of my reader who allowed me to share these images.

© E. Lee Eltzroth and Hunting & Gathering, 2018. Unauthorized use and/or duplication of this material without  written permission from this blog’s author is prohibited. The piece can be re-blogged, and excerpts and links may be used, provided that full and clear credit is given to E. Lee Eltzroth and Hunting & Gathering, with appropriate and specific direction to the original content.