Doing your photo research the easy way. “Shading it with one hand, I carefully compared it to the sleeper”; Illustration for “Carriston’s Gift”  by Hugh Conway, 1885

I was recently asked to recommend books and websites for researching photographers working in the southern states in the 19th and early 20th centuries. I decided to compile a list that can be revised as needed.

There are many sources, but I hope to keep the subject narrow enough – sources on the photographers themselves – that neither of us (not you and not I), is overwhelmed.

Remember that many of these photographers worked in more than one southern state, and many came from outside the South. Photo research in the South is only one piece of the puzzle that is the history of photography in North America, as well as beyond.

If you feel something is missing here, let me know. And send me additions and updates. Keep in mind I am not listing photographic histories here, unless they also list photographers.

I intend to post sources for each state in groups: today for Alabama, Florida, and Georgia; next time for North and South Carolina and Tennessee; then for Virginia, Maryland, Kentucky, and St. Louis, Missouri; and I will finish this list with Arkansas, Louisiana, Mississippi, and Texas. This list may, of course, have to change before I complete these posts on this blog.

Following my posts on the states, or perhaps sooner, I will give you the names of directories, surveys and websites that focus on researching photographers in America, and then I want to tell you about some of my favorite books and websites on the various photographic processes, as well as some miscellaneous resources.

Let’s begin “our list” with those first three states, Alabama, Florida, and Georgia.

Robb, Frances Osborn – Shot in Alabama: A History of Photography in a Deep South State, 1839-1941, and a Checklist of Alabama Photographers (to be published by The University of Alabama Press, 2014)

I really look forward to this book written by my colleague in Alabama, which comes out next year. It was awarded the McMillan Prize, which the Press annually awards to the best manuscript submission of that year. Congratulations Frances!

It will include a checklist of more than 1,400 photographers who worked in the state, and more than 150 historic photographs from every region of the state.

I believe I know, more than most people may, about the blood, sweat, tears, and I am sure laughter, that went into finally getting this book together. Frances, I stand (actually I am sitting, but still…) in awe – you rock!

Here is a list of previously published books and articles on Alabama photographers.

Robb, Frances Osborn – “Shot in Alabama: Daguerreotypy in a Deep South State” and “Checklist of Photographers and Others Associated With Photography in Alabama” in The Daguerreian Annual  2004 pp.199-235

The Alabama Photographs and Picturers Collection at the Alabama Department of Archives and History includes photographers names when known.  http://digital.archives.alabama.gov/cdm/landingpage/collection/photo

Rinhart, Floyd & Marion – Victorian Florida: America’s Last Frontier (Atlanta: Peachtree Publishers, 1986). This book chronicles photography in Florida by well-known photographers like William H. Jackson, and many lesser-known photographers who worked in Florida. Several also worked other places in the South. It is heavily illustrated and has a ten page Biographies of Photographers section, as well as a good index. This is a favorite book in my personal library.

Weber, Bruce. The Sun and the Shade: Florida Photography, 1885-1983 (Norton Gallery, 1983), 96 pp. paperback. This is a catalog of an exhibit that traveled around Florida in 1984, including work of some of later 20th century American photographers. The show was curated by photographer Bruce Weber. Out of Print; I have never seen this catalog.

In the Photographic Collection of the State Library & Archives of Florida’s “Florida Memory” site, you can do a search by the name of a photographer, in addition to searches by subjects and phrases. There are over 180,000 digitized photographs on the site.  http://www.floridamemory.com/PhotographicCollection/

Early Georgia Photographers, 1841-1861: a Biographical Checklist compiled by E. Lee Eltzroth http://tinyurl.com/kbk5fts This document is in Google Drive and I update it periodically.

The companion piece to the above is my article “Georgia Photographers, the First Generation, 1840 – 1860” in the Georgia Historical Quarterly, spring 2008 (v. 92 #1).  The entire issue can be purchased from GHS but the article can be viewed for free by registering for a MyStor account at JSTOR at http://tinyurl.com/lhaqobr

MyStor is a great service. It allows anyone to access journal articles you may have difficulty seeing otherwise, and articles can be saved for later viewing. 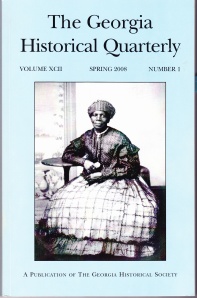 I also have compiled a list for the city and area of Columbus, GA, which is also found on Google Drive. I am in the process of revising it this summer, but it is remains accessible.  Columbus, Georgia area Photographers compiled by E. Lee Eltzroth http://tinyurl.com/k4ufcbk

This catalog has good reproductions of photos in the collection, and photographers are named. The Appendix is an index of Atlanta photographers, 1840 – 1930, but dates are approximate because it is derived from city directory business listings only; out of print.

Note: This is the catalog for an exhibit I curated in 1980; you can contact me for updated information on any of the photographers listed in the Appendix, but contact The Atlanta History Center to provide information on any particular image reproduced here – cite the negative number given.

The database of photographs at The Atlanta History Center, Album, includes many, but not all of the images in their collection. http://album.atlantahistorycenter.com/

The History Center and the Georgia Archives (including their Vanishing Georgia collection) are only two of the many
Georgia institutions included in the Digital Library of Georgia (DLG). DLG provides links to many photograph collections in many repositories, and quite often the photographer is named. One or all can be searched at http://dlg.galileo.usg.edu/MediaTypes/Photographs.html

Several publications and some websites highlight individual photographers who worked in each of these states. A search on the web by photographer’s name should lead you to those you seek.

The following are some examples of what is available on a single photographer, but there are many, many other print and digital sources.

Photographer William E. Wilson is represented in collections at The Historic Mobile Preservation Society and at the Georgia Historical Society. Articles and monographs about him have been published in both states because he worked as a photographer in both Savannah and Mobile.

Many books on photographs and photographers of Florida’s Seminole tribe have been published in the last few years, in particular those highlighting the work of documentary photographer and naturalist Julian Dimmock.

You can look at images made by Thomas E. Askew, an African American photographer working in Atlanta, in the collection at the Library of Congress entitled “African American Photographs Assembled for 1900 Paris Exposition” at http://www.loc.gov/pictures/collection/anedub/

Comparing the photos at LC in the above collection, with those same images found in collections elsewhere, I believe the photographs called “Evolution of the Negro home” were taken by another African American photographer, A.S. Williams (incorrectly identified in elsewhere as A.J. Williams).

I plan to share my information on these two men, their training in photography and their later photo businesses in a later post.

There are many publications on the work of photographer Lewis Hine, who documented labor conditions in many places, including several states in the South – he was photographing in Alabama and Georgia, 1909-1915. Collections of his work are located in various repositories, including the Library of Congress. One source for the original captions for the photographs is found at  http://www.historyplace.com/unitedstates/childlabor/index.html

Lewis Hine. Kirkland, Georgia, March 1915. “John Paulk and family – one of the most prosperous farmers in the district.”  Library of Congress Prints & Photographs # LC-DIG-nclc-00244

And as a final note, you may be familiar with the paperback books on various towns, cities, and regions in these three states published by Arcadia Publishing. They may be a part of their Images of America, or Postcard History, or another series. Photographers are often cited in these published collections. These books are available at http://www.arcadiapublishing.com/index.html or by inter-library loan through your public library.