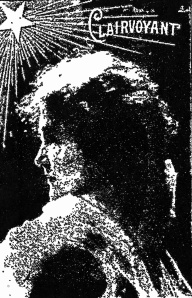 This post could easily be a Monday Mystery. My subject of the day is Grace Gray Delong who briefly ran a photography studio in Savannah, Georgia, but spent most of her career working as a psychic.

She worked as a psychic in several different states, but as far as I can determine, she only worked in photography in the state of Georgia. Her photography studio, The DeLong Studio, did not begin operation until June 1918, but prior to that, her presence was certainly known in the city of Savannah.

DeLong’s first advertisements, in 1911, appeared in the Savannah Tribune, an African American newspaper published since 1875.  She had already been advertising her Special Readings by the time she announced her “First Public Appearance in Savannah.” She would hold a Spiritual Séance “identical” to one she gave at The White House. This is interesting, to say the least, and I have found nothing to substantiate that claim – yet.

The first Savannah city directory listing I find for her, in 1912, is under the name of Mrs. A. DeLong, “palmist” working and living in Thunderbolt, Georgia, a Savannah suburb along the Wilmington River, just southeast of the city.

The city directories in most Southern cities were divided, in the era of Jim Crow, into White and Colored sections for the individual listings, but not businesses.  Our Grace is listed in the “white” section of the City Directory, not the “colored” section, that year. This is true for all her Savannah directory entries, from the first one I found in 1912, and for those in 1913, 1914, and in 1919-22.

Now I begin to wonder if she considered herself as African-American, or perhaps I am confused, and she actually was not. Until it is proven otherwise, her name and studio will remain in my database as an African American female photographer.

I believe it is important to know, within the history of photography in our state, which ethnic groups made their way into the world of photography. When, where and with whom did they train? How long did it take, how much of an impact did they make, and how did they grow their businesses? These are all questions that need to be asked and answered.

In both the 1913 and 1914 Savannah directories she is listed as the wife of a Thomas J. DeLong, and they were living within the city of Savannah, on West Broad St. Her occupation was that of a “palmist and clairvoyant,” and in 1913 (only) his name can be found listed under “Real Estate.”

Those two directories are the only place I find them as a couple, thus far, and she was not listed again in the Savannah city directory until 1919, when she is listed alone. Her advertisements as a clairvoyant, which ran periodically in the Tribune from 1911 (when she had “twenty years of practical experience”) through 1913, began to appear again in 1917.

I believe that she and Thomas divorced. They apparently did not live together often although she used his name and billed herself as Mrs. DeLong, or Madame DeLong.  I will get back to her name(s) later, so read on.

Madame DeLong’s announcement of her return after a trip out of the country, appeared in the Savannah Tribune Nov.-Dec. 1913

Grace DeLong was an attractive woman, and she had great confidence in her abilities.  She often used her photograph in her advertising for her DeLong Photo Studio, in Savannah, Georgia (June 1918 – 1920), as well as in her advertisements as a Palmist; Life Reader & Adviser; Clairvoyant; Medium; Psychic; Little White Mother; and my very favorite – The Woman With 1,000 Eyes.

In addition to Savannah, I found directory entries and/or newspaper accounts for her work as a psychic in Florida, Mississippi, Georgia, and Washington D.C., in the following cities for these years:

She also stated in that she had worked in New Orleans before her arrival in D.C., although I have no documentation.

She was indeed, in the mode of James Brown, “the hardest working” woman in the psychic business. Between 1917 and 1923 she would periodically leave Savannah from a few weeks to a few months, although she advertised herself as “permanently” in Savannah (and she also advertised her “permanence” in other places).  For example, in 1920 she spent January 3-15 and February 1-15 in Savannah, GA, and Jan. 16-31 and February 16-29 in Jacksonville, FL.

Mrs. DeLong’s first advertisement for her photography studio appeared in June 1918, using the same image she would also use for her psychic business – a woman’s head and arms shown in an “Egyptian pose” with sun rays emanating from the pyramid behind her. 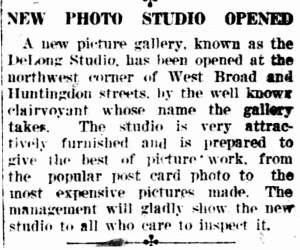 That very first advertisement above, states that “St. Julian R. Johnson, Studio Director, 30 years in Savannah,” was running the Studio, and “we specialize in photography of the darker races.”

Although I have not tracked him earlier, St. Julian R. Johnson was certainly a photographer in Savannah by 1918, and he was running his own photo studio there by 1919, with his wife, Jennie (Virginia) as his assistant – both of them are listed in directories and the census as being White.  Johnson remained a photographer in Savannah at least through 1925, but was out of the business by 1930.

So Johnson’s time with the DeLong Studio was very brief, and within a few months the photographs at the Studio were being handled by Herbert DeLaigle,  an African American.

Announcement that DeLaigle had joined the DeLong Studio, Aug. 1918

In October 1919 he advertised that he was now  “operating the DeLong Studio,” and advertisements carry his name through June 1920.  By the time the 1920 census taker came, he was noted as being a “photographer at home.”

DeLaigle quit the photo business in Savannah by 1930, but he was a photographer again by the time he registered for the draft in 1942, and by then living in New York City.

Grace Gray DeLong continued to place advertisements simultaneously for the Delong Photo Studio (“open day, night, and Sundays”) and her business as a Live Reader and Adviser, etc.,  in the Savannah Tribune.  She announced in October 1919 that she had “returned from the North” and seemed ready to put a priority on her psychic business, “now located at 523 W. Broard,  upstairs over the DeLong Studio,” which was being run for her by DeLaigle.

By July 1920 she had moved out of the city again, this time to Avondale, near Thunderbolt, where she had located her business as a psychic before.  By 1922 she was back in Savannah proper, on Wayne Ave. and calling her place of business the DeLong Studio.

Her ads for the psychic business continued after those for the photo studio stopped. They appeared well into 1922 in the Tribune, and she placed an advertisement for her Savannah business in the Dallas, Texas newspapers in the summer 1923.  She left Savannah shortly after that.

The place that she chose to spend most 0f her time once she left Savannah is Washington D.C.  She must have gone there regularly for years, even prior to her life in Savannah, and in that “first Savannah appearance” advertisement, she did mention giving a “séance” at the White House, so she was there sometime prior to 1911.

In D.C. she advertised in the 1916 Washington Afro-American and The Washington Times, and an article about her from that year, 1916 and pre-World War, appeared in the Washington Post. It is particularly interesting and gives us a view into her thoughts: “Seeress Forecasts War on America and Sounds Vigorous Call to Arms”  http://fnote.it/lkq

Within the 1937 and 1939 newspaper advertisements she placed in The Washington Afro American she referred to herself as the “Radio Personality with the Mystic Television Eyes,” who had given readings in Miami, Savannah, New Orleans, and “here in Washington D.C.,” as well as stating that in her business, there was “no racial discrimination.” She also spoke on a D.C. radio show, according to the ads. I do not have a copy of those 1937 and 1939 advertisements, but she also mentioned her “mystic television eyes” at least as early as 1937 in an advertisement I do have.

DeLong advertised in and was listed as a Clairvoyant, etc., in Washington D.C. city directories until at least 1954. That means that if she actually began when she advertised she did, about 1890, then she had worked as a clairvoyant for at least sixty years.

As for her photography – there was a D.C. photographer into the 1930s named Heber A. DeLong – a relative or in-law?  Someone who taught her enough to begin a photo studio? I know nothing about him as a photographer, but it is an intriguing avenue to pursue – for someone else.

Then there is the issue of her name – and more confusion.

Grace Gray DeLong was apparently a pseudonym, and it was said she came from Kentucky. In addition to the name she most commonly used, she called herself, at various times, A. DeLong, Stella DeLong, and lastly Mrs. Stella H. Forbes, which is given in parentheses after her 1954 entry in the D.C. city directory.

Someone will have a wonderful time looking further into this woman’s life, and I would love to have the vitals, her birth and death dates in particular. I have not done an exhaustive search, by any means. There are many clues to follow, but my brick wall will absolutely not come down until I get her name right.

As I said before, I count her as only one of about 60 African Americans, and one of only four African American women working in photography in Georgia prior to 1920 – it seems that I am quite possibly wrong about her race, but I am not yet convinced, and I will leave that statistic alone for awhile.

Would she choose the African American community to work in because she was a clairvoyant and they were more accepting of that profession? And would that be the reason her venture into photography would also cater to that community, or was she doing it for other, more personal reasons?