One of my favorite anecdotes connected with a Georgia photographer is the one related to the life, and in particular one escapade, of photographer Charles J. Warner of Rome, Georgia. I believe much, but probably not all of what has been reported, is true. And we may never know what truly transpired.

Rome was not really such a “Little” town and “Romans rebuilt rapidly and with more grandeur after the war.” You can read more about Rome in the New Georgia Encyclopedia:  http://tinyurl.com/koghnvd

The title of today’s post comes from an article that ran in the New York Herald on April 1, 1880 on page 5. The best header on an article that recounts the episode I am going to tell you about is the one that ran in the Atlanta Constitution on April 4, 1880 (page 1 columns 1 & 2). That one was entitled A Roman Fiddler.  If that had been a bit more descriptive of the persons involved, I would certainly have used it as the title of this post!

I will begin with what I know about Charles Jacques Warner.  He was born on Feb. 23, 1834 in Gravesend, which is a “town in southeast  England, in Kent on Thames estuary.” His father was born in England and his mother in France, which explains his middle name.

That definition for Gravesend’s location comes from my handy-dandy Merriam Webster’s Pocket Geographical Dictionary. There are times when you are simply sick of referring to an online guide and you want, no you need a physical book. This one resides, along with other miniature reference books, on my close to two-decade-old L-shaped desk pull-out keyboard; does anyone still put a keyboard there?

Now I will return to the life of Charles J. Warner.  He immigrated to the United States in 1848, and I assume he came here with his parents and siblings.  He ran away from home right after he immigrated, and he was only about fourteen years old. This is according to his wife Elizabeth’s later account, which is based on what he had told her of his early life. I have not found either an 1850 or 1860 census record for Charles, but there are several possibilities.

It is interesting that records indicate he was never naturalized, leading me to believe he did not serve in the military during the Civil War, and I have found no record that he did. If he had, he could have gained his citizenship. I have yet to account for him during that time-period.

But after the war, by the mid-1860s, C. J. Warner was in Richmond Virginia, where he met his future wife, Elizabeth Frances Brown.

Here is where their story begins to get more interesting. Elizabeth “Bittie” Warner was later quoted as saying that she “noticed that during our courtship he always pleaded that he had an engagement every evening about seven o’clock…..”  He would not tell her what he was doing, so she had her brother follow him. They discovered that Charles played in a circus band.

I have seen cartes-de-visite marked “C. J. Warner, Richmond Va.” for sale, so it seems he was working in Richmond as a photographer when they met. He left the circus band, because, I assume, he knew she was not keen on marrying a photographer who was also a circus musician.

He soon found another photographer with whom he formed a partnership. They established a gallery in White Sulphur Springs, a resort area of West Virginia. This would have been about 1868.

Charles and Elizabeth married in Virginia in 1866, and they are found on the 1870 federal census in Lewisburg, West Virginia, which is in Greenbrier County, the location of Sulpur Springs. By that time they had two children – a son Edward, was born in Virginia about 1867, and a daughter Louise, was born in West Virginia in about 1869. Elizabeth’s mother Catherine Brown lived with them.

In 1870 they heard of a gallery for sale in Rome, Georgia. This was the gallery of R. L. Rasbury; his Empire Photograph Gallery was located over Veal’s Jewelry Store on Broad Street.  He also advertised as “R.L. Rasbury’s Temple of Art.” Rasbury was leaving for Texas.

The story of the Rasbury brothers (there were two photographers in the family, Reuben L. and Mansell W.), is for another time.

With money Warner had saved, plus money from his wife and her mother, the three bought the gallery and moved to Rome. After a client base was established, they opened a store for the sale of “photographs and artist’s materials and fancy pottery.”

Advertisements for Warner’s Photographic Stock House ran in various newspapers in other Georgia cities in February and March of 1873, and in at least one journal of  photography in 1874; this advertisement is from the Bainbridge Weekly Democrat Feb. 6, 1873 p3c4.

Warner also took care of the Rome Opera House,  sold tickets for the performances, and “was very much a public man.”  Bittie even bought Charles a horse to travel twenty miles to the nearest Masonic lodge, so that he could become a Mason. That would be good for their social life as well as their business.

Bittie said she “managed not only to attend to my house and keep boarders, but also to be a clerk in my husband’s store, and he used to tell his customers that the reason he could sell cheaper than others was that he did not have to pay a clerk.” We can assume her mother took care of the children.

It is obvious that Bittie really kept things together. Behind every successful man — a woman!

They established a social circle and had a friend, a dentist, who was also a musician and played the violin, and Charles Warner was “an excellent flute player.” The dentist also had a daughter who was a good vocalist. By late 1879, she and Charles spent a great deal of time together – making music.

Rumors about the two began to circulate, but Bittie chose to ignore them, and Charles denied them.  The gossip finally forced her to ask Charles to tell the young woman to stay out of their store, and he refused.

Early in 1880, Charles was off to Atlanta “on business” and he took their daughter Lula (Louise’s nickname) with him. Bittie was left in charge of the photography gallery, and had their two sons to take care of as well – a second son, Charles J. Warner Jr., was born after they moved to Georgia.

After several days the dentist, father of the girl-vocalist who was about twenty years old in 1880, came to see Mrs. Warner. He wanted to know when Charles left because his daughter had gone to the nearby town of Kingston and she not returned. He obviously had his suspicions!

The dentist-father tracked down the two of them. He found out they left Atlanta and went to New York. He went there and he discovered the two had gotten jobs with Skiff and Gaylord’s Minstrels, but by then the show was in Boston.

Bittie received a letter from Charles saying he left her because “he thought it was better” and he thought Lula (called Lulu by the press) “should be fitted for the stage.” Another letter arrived that she did not read but “others” did; she said this letter was “very abusive of me.”

Some of Bittie’s women friends were going to New York “to buy millenary,” that spring, and she decided to go with them to try to find her daughter. The mayor of Rome gave her a letter to pass on to New York Mayor Cooper, who recommended a lawyer to her. That lawyer hired a detective who found her husband.

It seems Charles was carrying out his plan. He had his daughter Lula “playing Eva in Uncle Tom’s Cabin at the Lyceum in Williamsburg.”  Charles was either in the band, or “did something in connection to the performance.”

Bittie said she “did not want my daughter brought up for the stage, I want her to be brought up so that she shall know her brothers when she sees them.” She also said “she is my only daughter. I had another daughter, but she died when she was four years old.” This would have been the couple’s first child, dead before 1870, and not on the 1870 West Virginia census with the other two.

The case was heard in court at the end of May 1880. My quoted material comes from the newspaper accounts of that hearing. I assume the dentist got his daughter back sometime before the hearing, but that was not mentioned.

Warner did not show up for the hearing, and the judge signed an order “giving the child over to the control of her mother.”  The next morning “it is said”…..Charles went to the house in Brooklyn where his wife was staying, and “made a pretentious show of cutting his throat with a caseknife,” and threatened to take the daughter on the ferry and “plunge her into the East River.” Then he left.

In June, when the 1880 New York City federal census was taken, Charles, age 43, was still living there, boarding with a couple, and working as a musician. He or his landlord declared that he was “widowed.”

Bittie is also on the 1880 federal census, in Rome, Georgia, and it was also taken in June. She is listed  as “Betty,” married head of a household of three children.  Her occupation was given as Variety Store.  Her son Edward, only thirteen, was working as a bank clerk.  Louise “Lula” is assisting at home.

I cannot determine exactly when Charles moved back home to his family in Rome, Georgia, but his wife took him back, and the whole family appears on the 1900 census together (Edward left home by this time).

He may have still been working as a photographer in 1900, but his occupation as given on this census record is difficult to decipher – it may say daguerreotyping, although that term was rarely used so late as 1900. His occupation is written in next to ‘France’ (mother’s birth place). Anyone out there able to tell me what this says?

I doubt that C. J. Warner remained in business as a photographer after he returned to Rome, but he possibly remained in the variety store or other mercantile business. There was a lot of competition from other photographers in Rome by 1875, and certainly so after 1880. 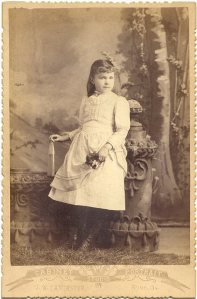 Back mark of a ‘penny picture’ c.1900, with a printer’s error; these were probably made by John W. Pickard, who had worked in Alabama in the 1890s; Author’s collection

Lulu, who never married, became president of the Rome Music Lovers Club about 1921, and had been teaching since about 1900. Charles, called Jacques, worked in a bank by 1900, and continued along that career path after marrying in 1907.  Edward married in about 1891, and before 1900 was living in Atlanta and working in the financial sector.

When Charles J. Warner died on November 29, 1906, the newspapers in Rome called him “an old and highly respected citizen of this city. ” At least that is true of the only item I have been able to find related to his death, which was reprinted in the Atlanta Georgian on November 30th.

Today, we might call Warner’s complete meltdown, a mid-life crisis. Maybe we would call it something more,  if we believe his reported threatening letters and actions.  But unlike today, the media, in the end, was kind to him.  Would they, or we, be so forgiving today?

← Monday Mystery – Are these gents Savannah Irish? Irish-born photographers in Savannah and Other Georgia Cities
A Reevaluation – But Mysteries Remain →