Monday Mystery – Are these gents Savannah Irish? Irish-born photographers in Savannah and Other Georgia Cities

The mystery photo I want to share with you today is one I purchased from someone who thought it was a Savannah “4-H” group band.  I do not believe it has anything to do with that organization, but there is definitely a “4” on those uniforms, and there is at least one musical instrument evident, a horn.

This does appear to be a parade group, and could that be a “fire hand engine wagon” someone leans on, or a fire hose reel? My guess is this image dates c1895 – 1905, and the last hand engine was out of service in Savannah by 1871, according to the history of the Savannah Fire Department. Perhaps one was used for special occasions like the old annual fireman’s parade, or in the St. Patrick’s Day Parade?

Here’s a detail of the group (click to enlarge):

Here’s a smaller detail, showing their shirts, but maybe not quite clear enough to read  (click to enlarge):

The 1850 population of Savannah Irish was at 1,555, and in 1860 Gleason gives it as 3,145, which is an increase of 102.3%. As you can see, much of Georgia’s Irish were living in Savannah before the Civil War, and many remained there and more arrived afterward.

I am always interested in Georgia’s photographers of various ethnicity and origin. The following are those photographers and their associates I have documented (thus far) as born in Ireland, and the majority worked in Savannah.

Of course, many more in this profession were second generation Irish-Americans. Contact me for additional information on any individuals listed here, the below is only a brief entry on each person.

Working in Savannah (dates active there are in parentheses):

Isaac Beckett, b. c1839 in County Mayo; d. Feb. 27, 1911 in Savannah (Dec. 1864 – 1865). I believe he is the same person who was connected with the postwar Savannah Custom House.  http://tinyurl.com/mhp2aso  And I also believe this carte-de-visite portrait by Samuel A. Cooley, with whom Beckett was first associated in SC and Savannah as Cooley & Beckett, is likely he.  Beckett was naturalized through his three years service in the U.S. Army (NY Infantry Regt., 56th) 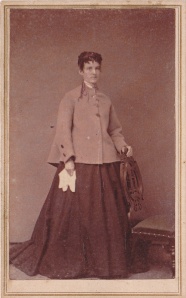