A short post to let you know about the latest updates to my Biographical Checklist of Early Georgia Photographers, 1841-1861 (January 2016).  This checklist is what I call “a Living Document.” I update it as often as necessary, and to me the personalities listed within it have become very much alive. Although I never expect to, I often find more bits and pieces of information about their lives and work, and with each addition to my database and update of the Checklist, these photographers become, to me, more and more flesh and blood human beings.

Three recent updates are related. I not long ago found that three of these artist-photographers and photograph partners had a relationship that I had not before fully explored or noted completely in my Checklist.

In 1859, partners Tucker & Perkins advertised their Augusta “Southern Photographic Gallery of Art” in the LaGrange Reporter (June 2, 1859 through Nov. 30, 1860). They had “secured the services of” Mr. J. M. Tomlinson, “the distinguished Portrait Painter and Photographic Colorist.” Tomlinson would also take customers’ orders for the paintings, which he would do for the Tucker & Perkins gallery.

The same advertisement noted that a LaGrange photographer, J. Pleasant Prophitt (ca. 1829 – 1890), exhibited work executed under the Tucker & Perkins gallery name, at his own gallery. Prophitt’s gallery was referred to in their earlier advertisements as “Mr. P. Prophitt’s Ambrotype Gallery,” where orders could also be left.

James M. Tomlinson (1835 – 1898) had worked for Tucker & Perkins before this time. By late 1858, they advertised his services to their Augusta studio in the Athens Banner (Dec. 9, 1858 – June 13 1859). He was only one of three artists they had employed within the state at that time, the other two being William C. Hunt and William R. Freeman.  Tomlinson was working for them out of LaGrange as an artist and photographic portrait painter. I originally thought Tomlinson worked for Tucker & Perkins in Augusta. He visited their Augusta studio from time to time and he is noted as boarding there at least once, but I now believe he worked for them primarily out of LaGrange.

Thus, photographers Prophitt, Tomlinson, and Tucker & Perkins were connected to one another from the late 1850s into late 1860. Tomlinson and Prophitt would themselves, in early 1866, become partners under the name Tomlinson & Prophitt, and their partnership lasted until about 1868. 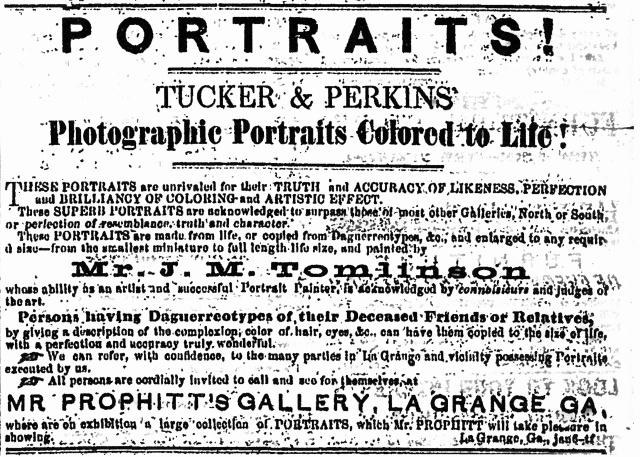 This information is reflected in the update of my ongoing list of Early Georgia Photographers (most recent updates are in Blue). As usual, please let me know if you read an entry that makes no sense, or see that one does not agree with a related entry.

You might note other updates in this version of the Checklist: A. J. Bearden was the Tucker & Perkins agent in Rome, at least in early 1860; A. J. Riddle advertised in 1860 that he had made daguerreotypes in Rome about 1852, and I have found a July 1852 Rome Courier advertisement-poem that appears to be signed by him.

Thank you for reading! And good luck to you in your hunting and gathering, fleshing out your own research, and making your own “beings” on the page come alive.

© E. Lee Eltzroth and Hunting & Gathering, 2016. Unauthorized use and/or duplication of this material without  written permission from this blog’s author is prohibited. The piece can be re-blogged, and excerpts and links may be used, provided that full and clear credit is given to E. Lee Eltzroth and Hunting & Gathering, with appropriate and specific direction to the original content.