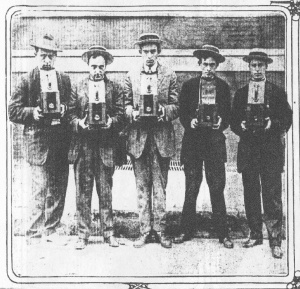 An uncredited photo of Atlanta “Snapshotters,” in the Atlanta Constitution 16 Nov. 1913 p.2

In light of journalists being in the news again, I thought you might find the following of interest. The actual caption to a group of photos, including the photograph above, is “Atlanta Snapshotters Care Not What Becomes of Them if They Get the Picture–The Photo’s The Thing.”

This is the first photo in a group which were used to precede an article (which is chatty and not really about these men) – these are the Atlanta photojournalists who were “lined up at the courthouse during the Frank trial.”

Other photographs used in the group include two of Francis Price – one of him atop the Healy Building getting a “bird’s eye view” with his camera, and another of him being hoisted to the top of a building by a derrick.

Price later became a partner to both Mathewson and Winn, before taking his own life in 1928. For more on these photojournalists and several others, see the collections of the Atlanta History Center. They also hold oral histories by later Atlanta photojournalists, as well as the papers of the Atlanta Press Photographers Association.

See also the issue of Atlanta History, winter 1998 (f. 41, #4) which includes “Extra, Extra! See All About it! Photojournalism in Atlanta.” This is now available online via the Atlanta History Center website, search for it at http://tinyurl.com/kbmxpog

If this is a topic of interest to you, see also their book Atlanta Scenes; Photojournalism in the Atlanta History Center Collection (Arcadia Publishing, 1998; reissued 2003).  Of course many, many photographs made by the photojournalists represented in their collections are used here.

For more on Tracy B. Mathewson, who had roots in Augusta, Georgia, and became well known for (motion picture) filming of the greats of politics and sports, see a collection of his papers at Emory University Manuscripts, Archives, and Rare Books Library (MARBL) http://tinyurl.com/o828x39

Below is another photograph from the same page as the image above, again uncredited. The caption notes  that this is “two witnesses at the Frank trial who were too quick for the photographer.”

The Leo Frank case is one of the, if not the most famous, and shameful, events Atlanta has witnessed. For more on the Leo Frank trial, and its aftermath see   http://en.wikipedia.org/wiki/Leo_Frank

This is one of the places you can find cites to the many books, films, articles, etc. on the case and subsequent events, as well as where various collections of Lee Frank-related materials are located.