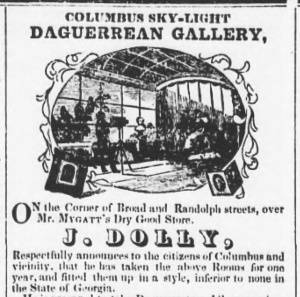 Advertisement detail for daguerreotypist John Dolly, who worked in Columbus GA in July 1851 – July 1853; this ad ran in the Columbus Enquirer for one year as of 15 July 1851

Happy New 2015! I want to share some useful items I have recently learned about, and share a major update to one of my biographical checklists of Georgia Photographers and their associates. I will begin with the Checklist.

Preparing for the new year, I have been working the last several months on a significant update to my “Early Georgia Photographers, 1841 – 1861: a Biographical Checklist.” This is a continual (last done in September 2014) revision of my checklist originally published in the Georgia Genealogical Society Quarterly, almost seven years ago in the spring 2008 issue (v. 44 #1).

My ability to more accurately give start and end dates within a city or town for some of these photographers, artists-colorists, dealers, etc.,  I largely owe to the continued addition of newspapers online in the Digital Library of Georgia http://dlg.galileo.usg.edu/  and their South Georgia newspapers in particular. Thanks again, folks! I look forward to the addition of the North Georgia newspapers in the near future (fingers crossed).

I have also done additional census research in order to explore these persons’ lives before and after their arrival in Georgia (and many, many are not native Georgians). Working on my article on daguerreotypist George S. Cook as an itinerant  in Georgia, 1848-1850 (to be published in the upcoming 2014 Daguerreian Annual), forced me to re-examine and update research on the itinerants to our state prior to 1855.

Sharing some of my findings, including this list, in conversation with some Daguerreian Society members of at their annual meeting in Austin, Texas last fall, was a real thrill, and their feedback was inspiring.

The Checklist now only vaguely resembles the original, as you can tell by the updates I always add in Red – please don’t let this put you off! It is done more to help me than you. [Note that as of March 17, 2015 all entries are now in black, and only the last updated entry/entries are in Blue]

I am posting a link to the Checklist in hopes that it is useful to many of you. As I have previously mentioned, this is a living document, meaning it is never really “finished” – there is always more to be known about these people. I have exchanged information with other historians, and completed my research into the Georgia tax digest ledgers, 1890-1911, some of which pertains to earlier photographers, so updates to my database and this List will continue. http://tinyurl.com/kbk5fts

Please note that this compilation is mine, and mine alone. Contact me – either through this blog or via the email on the Checklist or in my About information – for source details on any photographer of interest to you.   If you have further information on any, find obvious errors, discover contradictions in information (a photographer’s data does not match that for a partnership in which he or she was involved, etc.), or you notice typos — oh, my yes, I do make them, as you may have noticed, please contact me. 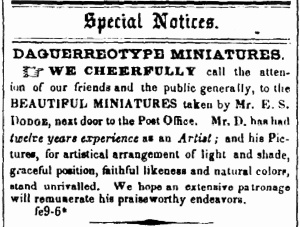 This “Editor’s note” advertisement for E.S. Dodge appeared in the Augusta Chronicle from 9-16 February 1849; Edward Samuel Dodge worked in Augusta GA making daguerreotypes October 1848  into November 1853; he worked there and in other cities earlier as an artist

In late December and the first part of January I learned about several sources available to help us in our research on photographs, photographers, and finding images.

Series I of the Driver collection consists of cased photographs. and Series II is Card and other photographic materials. I see that there are two Wilde and Daughter daguerreotype images located in Series I (see my Early Georgia Photographers checklist above) and there are also some Linnie Condon cabinet cards here in Series II. Condon’s second (or perhaps third) married name was Hendrick, with no S, so I do need to share that information with the collection curator.

I cannot wait for time to peruse the rest of Series II. The finding aid can be saved or downloaded. See the Printable PDF on the top menu bar, right.

There was recently a query  on an organizational list I follow “to find an exhaustive list of museums/libraries/cultural institutions that offer their images free for fair use.” The answers to that query pointed me to three sources I was not aware of.

A website that lists a great collection of Resources for Art and Architecture Images across the web cites those that are offering images freely. It was put together by Karen Bouchard at Brown University, and it begins with “tips and lists” of three cumulative guides to finding free images, which is followed by an extensive list of image providers. 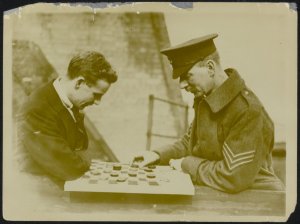 [English] soldiers [prisoner of war?], Playing checkers; from a German source, in the National Archive of the Netherlands WWI Collection, file # 158-0106

Links found on this site are to institutions the world over, including the U.S., the UK, France, the Netherlands, and the Scandinavian countries. Not yet listed on the link I give below is a recently highlighted public domain collection at the Museum of New Zealand (click Blog in the top menu to read about it).

And what about intellectual rights to some of the images you find and want to use? Check out the College Art Association’s Intellectual Property and the Arts. It too, lists sources that provide images, and focuses on images “suitable for publication.” The list includes image banks based in the USA, then those based outside the U.S., then lists fee-based image banks.

A source that could prove useful, depending on your research, is the Century Past Library, which links to periodicals in various repositories. It includes Century magazine, 1870-1922; Harper’s, 1850-1922 (incomplete); Life, 1883-1922; Nat Geo, 1889-1922; Scientific American, 1846-1922 and many more, plus — something out of the past of those of us who attended schools of library science — various readers’ guides to periodicals.

And in the Department of “always changing and growing”: Gawain Weaver has many useful things on his site on Photographic Processes at

Another style of photograph types and identification is found in “Everything You Ever Wanted to Know About Your Family Photographs” by David L. Mishkin.

And please take a look again at Luminous-Lint as it continues to change and offer us a wonderful way to look and learn. http://www.luminous-lint.com/app/home/

I really hope you found something of use or interest in this post. Let me hear your commments or questions. Happy Hunting and Gathering to you all for the year 2015.

← My 2014 in review, looking forward to 2015!
Friday Faces – The Bertillon System, Black Sheep, and Georgia Photographers →