I recently came across this short article on page 6 of the Macon (GA) Telegraph for Sunday, Nov. 18, 1883, which was apparently reproduced from a New York newspaper, the World (publishers since 1868 of the World Almanac).

A Colored Artist Who Colors.

The World  has discovered here a promising young colored artist, Frank F. Barnes, twenty-four years old, who makes sometimes $100 a week by his brush. “I was born,” he said, “in Georgia. I went to live in Washington when fifteen years old. I became acquainted there with many political leaders and succeeded in earning an easy living. I devoted all my evenings to study and painting. A few years ago I went to Philadelphia. I knew I was not a great artist, that I would never make a fortune out of the canvas, so I took to painting these photographs. The art is now very crude; all work done by men in this city is very poor. I paint photographs as I would paint on canvas.”

The World newspaper has an interesting history, and according to the Encyclopedia Britannica online “It was sold to a consortium of New York City Democrats, and abruptly turned on Lincoln after the Emancipation Proclamation of January 1, 1863. The paper was shut down by federal authorities for two days in 1864 for publishing a fabricated report indicating that the North would draft 400,000 more men for the Union armies…. Joseph Pulitzer purchased the newspaper in 1883.” http://www.britannica.com/EBchecked/topic/412582/New-York-World

All of this is even more interesting regarding the article I transcribed above, A Colored Artist Who Colors.  It is somewhat confusing and the article indicates that the artist, Frank Barnes, was living in New York City, but was he still in Philadelphia?

I was unable to track this particular Barnes down, either through my cursory look at the Federal Census (there are some artists named Barnes in 1880), or in other newspapers of the time.

Researchers, let us know about this fellow! Although he was born in Georgia, Barnes is not directly related to my research on Georgia photographers, but if there is an an interested and able researcher-historian out there, please take Frank Barnes on. I hope someone will be able obtain biographical information on him, somewhere, sometime.

A Note on This Blog’s Background Photograph 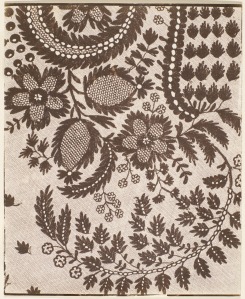 I have been meaning to “give credit where credit is due” since I began my blog, Hunting & Gathering, last month.

You may have or may not have wondered what that image is in the background to my posts. How much of the background you actually can see seems to depend on which operating system you use. I see more or less of it, depending on how I am looking at this blog — on my PC, my laptop, my iPad, or my iphone.

Whether you are curious or not, I want all of you to know what this image, is, and where it comes from.

To be exact, it is a digital reproduction of a Calotype of “Lace” made by William Henry Fox Talbot (English, 1800-1877), in 1841. It is one of the several wonderful images available from LACMA (Los Angeles County Museum of Art), they consider to be in the public domain.

This particular image, Lace, is from the Marjorie and Leonard Vernon Collection, gift of The Annenberg Foundation and promised gift of Carol Vernon and Robert Turbin (M.2008.40.913).

Take a look at LACMA’s collections at http://collections.lacma.org/  When a photograph or other object is considered by them to be in the Public Domain, there will be a “Download Image” statement on the bar underneath the image. Have fun!